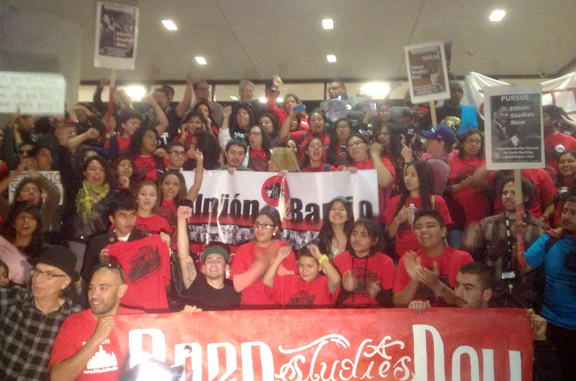 Unión del Barrio congratulates our Comité Local Patricia Marín, community organizations, and all committed individuals who participated in the now victorious Ethnic Studies NOW campaign in Los Angeles, California. We know that winning Ethnic Studies classes for all Los Angeles Unified School District (LAUSD) schools is a major accomplishment and represents an historic victory for the people of Los Angeles – in particular the young people of our communities. This victory would not have been possible without the dedication and sacrifice of those compas who took the lead of this struggle. 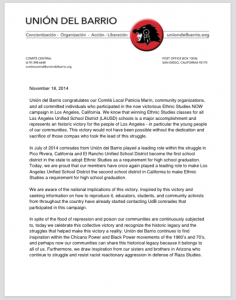 In July of 2014 comrades from Unión del Barrio played a leading role within the struggle in Pico Rivera, California and El Rancho Unified School District become the first school district in the state to adopt Ethnic Studies as a requirement for high school graduation. Today, we are proud that our members have once again played a leading role to make Los Angeles Unified School District the second school district in California to make Ethnic Studies a requirement for high school graduation.

We are aware of the national implications of this victory. Inspired by this victory and seeking information on how to reproduce it, educators, students, and community activists from throughout the country have already started contacting UdB comrades that participated in this campaign.

In spite of the flood of repression and poison our communities are continuously subjected to, today we celebrate this collective victory and recognize the historic legacy and the struggles that helped make this victory a reality. Unión del Barrio continues to find inspiration within the Chicano Power and Black Power movements of the 1960’s and 70’s, and perhaps now our communities can share this historical legacy because it belongs to all of us. Furthermore, we draw inspiration from our sisters and brothers in Arizona who continue to struggle and resist racist reactionary aggression in defense of Raza Studies.