Republicans Hate Everyone & Everything:

Ultimately, it was the Democratic Party, the Obama presidency, and the Republican Party establishment that paved the way for the rise of Donald Trump. Before the actual day of the 2016 election, Democratic Party arrogance perceived no danger from the rising proto-fascism that had seized “the base” of the Republican Party. Under Obama, Republicans created an alternate political universe designed to rally their base around a fanatical, fact-proof, right-wing populism. Tea Party zealots, religious fanaticism, white nationalism, right-wing media (talk radio, Fox news, online outlets), electoral apartheid (via gerrymandering), and expanding corporatism largely went unchallenged in practice and ideologically, from within the two dominant parties. The base of the Republican Party was openly and unapologetically united around old-school racism, misogyny, and medieval religiosity.

Right-wing media provided the cultural glue that held together these reactionary impulses; their media animated the Republican base with a zombie-like focus on eliminating all social, cultural, environmental, legislative, and economic restraints to patriarchy, racism, white supremacist capitalism, and U.S. imperialism. Under Obama’s eight years this bifurcation of U.S. political culture was rationalized by many Democrats and their media as a form of “hyper-partisanship” – a unique expression of anti-Obama and anti-Clinton narrow-mindedness, and therefore the only possible response was more “bipartisanship.” The Democratic Party did not raise the alarm to defend Women, nor to defend La Raza, nor Black people, nor Arabs, nor labor unions, nor public education, etc. Emboldened by the weakness of Obama Democrats, the Republican National Committee (RNC) leadership doubled down on the growing power of their base, and deployed a national strategy that would set the stage for an institutional right-wing coup d’état in late 2016.

This strategy was based on three basic tactics: right-wing media extremism, legislative minoritarian obstructionism (Republican party discipline demanded they block everything), and the establishment of the conditions to seize political control of this “democratic” system without having to win electoral majorities. From 2010 to 2016, a rogues gallery of right-wing militants rode the wave of Tea Party populism to win political control of a majority of state governments, and swiftly implement black and brown voter suppression and gerrymandering. With help from the majority right-wing Supreme Court, these state-level tactics were accelerated in 2010 (with Citizens United) and 2013 (the gutting of the Voting Rights Act of 1965). The RNC leadership and its allies from the right-wing media knew exactly what they were doing when they stirred up their white nationalist base, and their strategy paid off in a real way. In 2010 Republicans won control of the House of Representatives, and in 2014 they won control of the Senate.

Meanwhile, for eight years under Obama, Democrats continued to rally around a hope for “bipartisanship.”

This was the political fertilizer from which Trumpism emerged. The media charlatan Donald J. Trump ultimately channeled and harnessed the most reactionary Republican impulses to fuel his primary campaign. As Trump unleashed his poison against Mexicans, Arabs, and Women, he also attacked every Republican that crossed his path. The Republican Party “establishment” was quickly obliterated by its own “base,” who by late 2015 had cannibalized even the most right-wing Tea Party zealots among them, throwing their support behind the only man who promised he would blow up the entire system. Indeed, blowing up the system was always what Trump promised to do.

By January 2016 Republicanism had metastasized into a full blown proto-fascistic movement. Trump supporters denounced the direction of the political and economic system of the U.S., not because they sought to reject U.S. imperialism, no, instead they sought to “Make America Great Again” – it was the promise of Yankee National Socialism, to return to a time when U.S. imperialism was driven to advance the material interests for white people via white supremacy. Mesmerized and energized by Trump’s prideful buffoonery, nearly 63 million Americans voted to support unbridled white supremacy and misogyny to deliver Trump an Electoral College victory (the only victory that matters), despite having lost the majority vote.

As of January 20, 2017, Trump assumed control of all branches of federal government power and a stolen Supreme Court appointment that will guarantee control of the majority of that body for at least a few more years. Trumpistas also hold sway in a majority of state governments. They seized this political power without winning electoral majorities, instead relying on the Electoral College, voter suppression, obstructionism, gerrymandering, and redistricting. Trumpista fascism has gone so far as to dismiss and/or actively obstruct investigations into the active intrusion of Russian agents in the U.S. electoral process – trumpistas argue that the Russia accusation is a secondary grievance coming from “libtard snowflake crybabies” – the hateful epithet used by trumpistas to dehumanize anyone who resists their reactionary movement.

Even now, despite their victory, Trump and his trumpistas strut about, mocking the 73 million majority that voted against the leader of their movement, and dismissing the 90 million more eligible voters that did not vote at all. Trumpistas actively reject any substantive political economic critique of war, imperialism, environmental degradation, racism, or capitalism in general, while Trump tweets away institutional norms to erode the balance of imperialist power in ways that is terrifying to liberals and even many traditional conservatives. The Republican Party “establishment,” the Democratic Party as a whole, and tens of millions of Americans did not have the analytical tools to understand what the 2015-2016 Trump candidacy really represented, and are now largely demoralized, fearful, and wholly unprepared to resist an increasingly militant trumpista fascism. Liberals pass around the hashtag #resist, while they continue to reject revolutionary ideology and organized resistance.

Trumpista Fascism Is Evidence Of An Internal Crisis Within Imperialism

The undemocratic nature of this crisis-ridden system is not a quantitative problem related to more or fewer votes for one or another candidate. We will never be able to vote our way out of this mess. The power of trumpista fascism is not based only on votes. The crisis we see all around us represents a qualitative/ historical problem of an empire in decline, where it does not matter if the losing candidate won the popular vote, nor is it perceived as a problem that the vast majority of eligible voters do not participate at all in the political process.

The default status of a neoliberal empire in crisis is revealed as an undemocratic national security state, inhabited by at least 63 million backward and/or distracted trumpista subjects. The neoliberal project was never sustainable, and Trump proves that the obligations of imperial/ white nationalist political economic arrangements of the past have once again taken priority. The electoral college system was designed exactly for this contingency.

The central political struggle of our people is not to count votes for one or another candidate, but instead to defend ourselves within this generalized crisis of neoliberal empire, and understand, organize against, and actively resist (not just share the #resist hashtag) the threat that U.S. imperialism and global capitalism represent to the survival of our species on this planet.

The political discourse of trumpista fascism is not new, but this historical context is unprecedented. We do not know what is coming, but we know what to expect. Unlike the perceived moderate and restrained neoliberal/multicultural empire of Obama, the foundation of trumpista fascism is totally unrestrained – that is, unrestrained white nationalism, unrestrained imperialism – unchained and unhinged from multicultural, environmental preoccupations and liberal cultural norms. The first 100 days of the Trump administration were a clear indicator of what this next stage of struggle will look like.

The Obama national security state passed to Trump a still largely secret capacity for surveillance, as well as the most powerful military in human history. The domestic and international rhetorical threats of trumpista fascism now wield all the levers of state power. Trump has control of the Presidency, the House, the Senate, and the Supreme Court. Candidate trump was a proto-fascist, a right wing populist. What he is doing now, with the consolidated power of the state behind him, must be understood as fundamentally different from his candidacy – this will be the objective manifestation of global fascism. Waiting for Trumps impeachment is irresponsible and foolish. 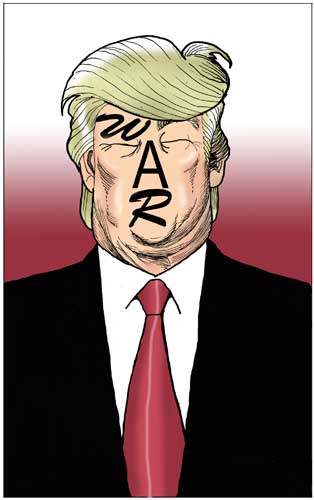 Anti-Trump activities are indeed spreading, but they are largely focused on resisting the man, a specific set of policies, or a media event. Anti-Trump resistance must evolve into anti-fascist resistance in order to reach some degree of ideological viability and sustainability. Trumpista strategists like Bannon and Miller recognize this weakness in the anti-Trump movement, and they intend to exploit it. Although Trump has assumed power with substantial mass support from the U.S. population, his support does not yet reflect a majority of the population. Trumpistas know that this is a problem, and they are intent on rallying more popular support for Trump. Russia, Comey, twitter, Ivanka, and all future trumpista buffoonery are distractions from the active implementation of real policies to undermine public education, workers rights, healthcare, the environment, and voting rights; foment global militarization, exploitation, and war; and to terrorize Raza, African Americans, Arabs, Women, and LGBTQ people.

In an effort to consolidate at least a small majority of domestic support, Trump needs to address some aspects of the neoliberal crisis within the U.S., as we have seen with token nationalist economic measures such as dropping U.S. support for the TPP, symbolically shaming some corporations into shifting a bit of manufacturing away from Mexico back to the U.S. (Ford, Carrier), hosting high profile meetings with labor union bosses, etc. There have been multiple public promises to secure massive investments in infrastructure and the military, and even introduce some form of expanded health care that Trump swears (in its final version) will be better than the ACA. Wall Street investors love Trump because his government represents the growing influence of corporatist ideology, where banks, corporations, and become one with the power of the state in order to increase their profits.

This program is literally what German National Socialism promised angry and demoralized Germans in the 1930s, and it is what ended up fueling Hitler’s mass-based support. We must remain vigilant and expose these tactics of right-wing populism, especially because the mass appeal of economic nationalism will be used to provide cover for the other tenets of trumpista fascism.