One cannot turn on the television or read online news without hearing about Venezuela. Mainstream feminist organizations and media outlets are standing with the Trump administration in calling out the economic situation in Venezuela by blaming democratically-elected President Maduro as the cause of the economic crisis, and supporting the installation of US puppet Juan Guaidó. When you do an internet search to learn more about how the current situation is impacting mujeres in Venezuela, you find a barrage of articles highlighting how the current economic situation is placing women in violent and desperate conditions. But, the real threat to the dignity of Venezuela comes from the US imperialist war machine who is offering “humanitarian aid” in the form of hostile coup and regime change.

The resilient and powerful mujeres of Venezuela have been organizing their communities to resist US government intervention and are not powerless pawns lost in conflict. Ana Marin, leader of a Chavista neighborhood collective shares with PBS journalists, “If the opposition takes over the government, we are not afraid, we will keep resisting because we are going to defend our accomplishments.” Luisa Yaguara, Captain of the Volunteer Bolivarian Militia also shares, “We will arm every man and woman so that no Yankee boots step here, and he who does, dead he will be.”

Although feminism in the US is widely understood as the equal participation of women in political processes like voting and lawmaking, it seems like those protections only extend to women who aim to uphold the white supremacist, patriarchal capitalist, neocolonial powers of the United States. Feminist organizations have historically helped undermine the leadership of black and brown women in the U.S., and abroad they have supported the perpetuation of imperialist violence. Many of these organizations are quick to call out the conditions abroad, conditions created by their government, and they issue support for U.S. intervention via missions and humanitarian projects, but are they are too often silent when it comes addressing the atrocities and consequences of imperialism.

Where is the outcry and manifestations of support from the mainstream feminist movement for the violence and trauma inflicted upon raza women and children who are being detained, seperated, and incarcerated by the Department of Homeland Security and then sexually assaulted, abused, and trafficked while under the “protection and custody” of U.S. officials. Recent reports released by the Department of Health and Human Services have uncovered that over 4,500 complaints of sexual abuse were reported to the Office of Refugee Resettlement between October 2014 and July 2018. Feminist organizations have released statements here and there shining a light on the inhumane treatment of migrants, but instead of standing with communities and the calls to dismantle the broken immigration system, they seek a “more humane” detention and deportation process. All while the Trump administration washes it hands by blaming victims, their non-profit contractors benefit from multi-million dollar grants paying for the long-term detention of children.

Despite 2018 midterm election campaign slogans and chants that boasted “Abolish ICE,” and despite more women of color being elected to office than ever before, change is impossibly slow as the two-party system pulls every politrick and exploits every loophole for their benefit. There is no way to reform a system that that was founded on the killing of indigenous people and the enslavement of African people – a system that continues to benefit from the trauma and misery of the worlds oppressed.

We turn to the leadership of radical teachers, the majority of whom are women, in California and throughout the country for evidence on how we can organize to change the material conditions of our lives. After a weeklong strike and years of community organizing in Los Angeles, United Teachers of Los Angeles were able to win the most radical education contract to date.

What is so historic about this win is that the majority of demands centered around the conditions teachers and students experience in LAUSD, such as smaller class sizes and access to support services on campus. It also had a huge impact on shifting the spotlight to the privatization of public education and the impact on our communities. The energy and fire from the Los Angeles teachers strike has spread across the nation with educators in Oakland, Denver, and other cities striking and organizing for better conditions.

We, the mujeres of Union del Barrio, stand in solidarity and struggle with the people of Venezuela. We stand with the millions of Chavistas who are living proof of the success of the Bolivarian Revolution. We turn to the leadership of our sisters in the South who are forming volunteer militias and community food projects to defend their communities by any means necessary. We stand with our sisters who are fleeing US orchestrated violence and poverty only to met with more violence and exploitation. We will fight until every imposed border, wall, cage, and cell is dismantled. We recognize colonialism, imperialism, and capitalism as the sources of oppression within our lived realities. 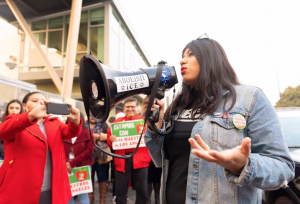 We recognize that the only way to change the material conditions of our lives is not by relying on a broken political system but by organized struggle. We must dismantle systems of oppression and create a world where mujeres thrive and no longer have to fight to survive. We call on all freedom loving mujeres and allies to join the struggle for self-determination and liberation of raza women. 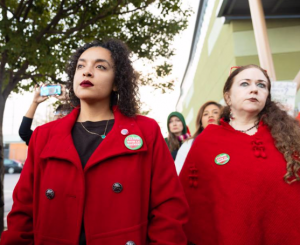 We send a revolutionary greeting to all of the committed, creative, resilient and powerful mujeres of Union del Barrio. We honor your sacrifice and are grateful for your leadership.