Comandanta Ramona was an officer of the EZLN. She was perhaps the most famous female Zapatista figure for her early leadership in the uprising. A member of the Zapatista leadership council, the CCRI-CG (Clandestine Revolutionary Indigenous Committee), she served as a icon of revolutionary equality and dignity for mujeres and all raza. 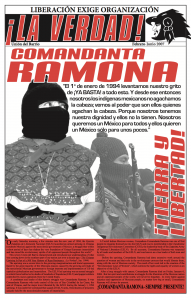 The cover of the February – June 2007 issue of ¡La Verdad!, the newspaper of Unión del Barrio.

In 1994 the EZLN led an armed uprising within Mexico in which numerous battles ended with the deaths of hundreds of Zapatistas (EZLN) and Mexican soldiers of the sell-out puppet Mexican government. Comandanta Ramona was a combatant and leader of this historic struggle. It was Comandanta Ramona who took control of the city of San Cristóbal de las Casas, the seat of government power in Chiapas, when this town was liberated by the EZLN after the January 1, 1994 uprising. It was under her command that squads of EZLN units freed dozens of prisoners unjustly held by the neocolonialist puppet government.

Born a Tzotzil Indigenous Mexican woman, Compañera Comandanta Ramona was one of first people to integrate themselves into the EZLN and rose to membership in the Clandestine Indigenous Revolutionary Committee (CGRI-CG), the political leadership body of the Zapatista Army of National Liberation (EZLN). By all accounts, Comandanta Ramona was respected by all cadre and members of the EZLN, and was known as a key leader of the movement.

Before the uprising, Comandanta Ramona had done extensive work around the question of women and their role within the revolutionary process that would liberate them, along with the rest of Mexican society. The result of her work led to the creation of the “Revolutionary Laws of Women”, which outline the fundamental rights of women within the liberation struggle undertaken by the EZLN.

After a difficult struggle with cancer, Comandanta Ramona died on Friday, January 6, 2006. Her spirit and contributions to struggle for the liberation of the Mexican nation and all oppressed people of the world will never be forgotten. In every battle against injustice and oppression of Mexican people, no matter how big or small, Comandanta Ramona will always be present.