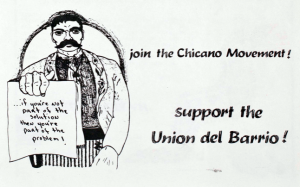 Conclusion: The Ongoing Contributions of UdB to the Movimiento.

Preface to the Online Edition: Unión del Barrio has over 30 years of experience behind us. For the purposes of more clearly representing this rich history of struggle, this online narrative has been divided into 11 parts and should be considered a work in progress. The videos provided in these sections are also draft versions in most cases offering only a slide show to accompany the written history of our organization. The videos were originally developed for the 25th Anniversary celebration of UdB in 2006. This work is primarily based on the UdB history book “Un Pueblo Sin Fronteras” (see archive), published in 1998 to document the first 15 years of UdB. The original 1998 version history book is currently out of print, but it is being revised, expanded and updated to be published again as a book.

Unión del Barrio: Introduction To A Legacy of Organized Struggle