The real question is, what are we going to do about it?

Among the generalized political division and increasing hatred that Trump has fomented during his first weeks as president, it takes a little work to discern what is now clearly a pattern of white nationalist aggression that has been unleashed against our communities. Indeed, it is easy to argue that trumpistas have been equal opportunity haters since their man took office on January 20th (anti-Muslim, anti-Black, anti-women, anti-LGBT, anti-freedom of the press, anti-environment, anti-education, etc.). What we need to keep an eye on is how civilian trumpistas are now aligning their hatred with state sponsored trumpista fascism, and together they have started to move more aggressively against so-called “immigrant” communities in general, and against Mexican communities in particular.

Here is a brief timeline to show what we mean… In late January and early February, just as the “Muslim Ban” and the airport protests had reached their highpoint, Trump’s “Executive Order: Border Security and Immigration Enforcement Improvements” not only authorized the construction of his infamous “wall,” but it provided the political framework for an immediate increase in deportations and ICE raids. Soon thereafter we began to hear about “sweeps,” and hundreds of detentions that took place during the first two weeks of February. 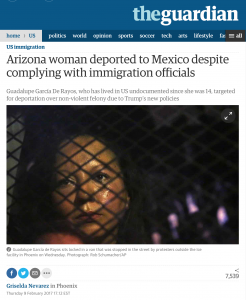 Among the many federal “anti-immigrant” actions deployed across the country, the first to receive significant national attention was the February 8th detention and deportation of the Mexicana mother Guadalupe García de Rayos in Phoenix, Arizona. In spite of the important spontaneous protest to her detention, multiple arrests were made of people who sought to block her deportation, and her expulsion to Mexico was expedited.

Two days later, on February 10th, news spread of the detention of the young Mexicano DACA recipient Daniel Ramirez Medina in Seattle, Washington. While his detention is still being challenged legally, this ongoing case now points to the possible suspension of temporary DACA rights if not in policy, then at least in practice. These Phoenix and Seattle incidents represent only a small part of a national intensification of the anti-Mexican “immigration” raids and related aggressive federal enforcement actions undertaken by the government that were motivated by Trump’s executive order.

As a consequence of the intensified ICE detentions, fear in our communities has spread rapidly, while hundreds of protests have been organized across the country to resist the raids. Some of these protests have included limited forms of direct action, although these do not compare to the serious escalation of violence expressed by local police and civilian trumpistas. To be clear, what we are arguing is that there exists a direct line connecting Trump’s anti-Mexican rhetoric to his January 25 executive order, the intensification of ICE raids, and the broader escalation of local police and civilian violence unleashed against “immigrant” communities. Furthermore, although this violence has been understood as a surge in general “anti-immigrant” sentiment, we argue that this aggression actually represents the early stages of a more focused anti-indigenous, anti-Mexican strategy that is at the heart of trumpista fascism.

February 16th. For example, at a protest that took place in Tucson, Arizona numerous people were arrested for blocking a downtown intersection, including members of the community organization known as the Brown Berets. At this relatively small protest, an 86-year-old lady was pushed to the ground by police, and another elderly lady who tried to help her friend was pepper sprayed right into her eyes. The Tucson police officer that pushed and pepper sprayed these women had clearly taken it upon himself to escalate the violence at the intersection that day. In multiple videos of the same protest, he is seen violently pushing another person, he was the first to put his hands on one of the Brown Berets activists, and he was the first to deploy pepper spray against the protesters. It is important for all progressive people to take note of the willingness of this Tucson police officer to use violence to crush this small nonviolent protest.

February 21st to the 23rd. Militarized police and private security forces moved against the last water protectors at the Oceti Sakowin camp, near the Standing Rock Sioux Reservation. From the outset Unión del Barrio understood the fight at Standing Rock as another front of our common struggle: the expulsion from Oceti Sakowin was the violent removal of native people from our own lands, so that colonial/ imperialist powers could impose their laws and their political will on our people, and thereby profit from our oppression. The young woman highlighted in the linked video below (see 03:07 to 03:17) provides clear evidence of how ICE raids and the forced expulsion of water protectors from the Oceti Sakowin camp are two distinct manifestations of the same repressive heart of trumpista fascism. 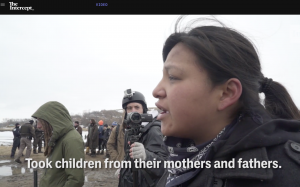 February 21st, 3:19 P.M. As the violent expulsion at Standing Rock was starting to take shape, hundreds of miles away a group of teens was walking home from school, passing through a residential area in Anaheim, California. After negative words were exchanged between the mostly Mexican teens and an off-duty LAPD officer dressed as a civilian, the grown man violently grabbed a 13-year-old boy, forcibly pulled him away from his friends, and dragged him towards his own house. When the boy’s friends intervened to help him get away from the grown man, the civilian off-duty cop pulled a handgun from under his shirt, and fired it in the direction of the teens, just inches away from the 13-year-old boy’s face.

February 22, 7:00 P.M. As the teens were running away from the gunfire in Anaheim, another violent attack was about to take place in a bar located in Olathe, Kansas. After getting kicked out of the bar for talking racist crap about other customers, a 51-year-old trumpista terrorist came back into the bar to shoot two “immigrant-looking” customers from India, Srinivas Kuchibhotla and Alok Madasani. Srinivas Kuchibhotla was killed, while Madasani and two other customers were wounded. While firing shots against his victims, the trumpista terrorist shouted “get out of my country!” One of the other victims was Ian Grillot, who took a bullet as he tried to stop the trumpista terrorist.

We can’t be too afraid to read the writing on the trumpista wall. All this must serve as a lesson to our communities throughout the United States. We must resist the urge to see these events and their consequences as unique, isolated incidents.

Instead, we have to see what is happening all around us as a larger political strategy that has identified our Mexican communities in particular as an “internal threat” to the medium and long-term goals of trumpista fascism. If we fail to understand these events as being connected, and as evidence of a broader trumpista escalation of anti-Mexican hatred and violence, then we resign ourselves to only reacting to incidents of anti-Mexican violence. Our communities cannot afford to limit ourselves to reacting to whatever trumpistas decide they have the right to do to us – we must organize ourselves in order to resist the coming storm.