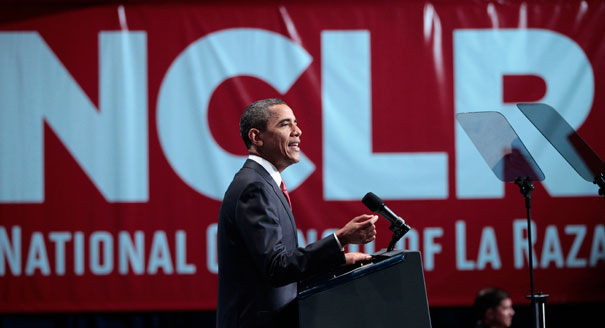 Real Change Will Only Come From Those Who Struggle For Dignity, Justice & Self-Determination

Editor’s Note: A version of this essay was originally published the day after the U.S. presidential elections on November 5, 2008. Responding to multiple requests, we decided to repost an updated version edited for readability and enriched with links from numerous outside media sources.

These links are intended to expose the sharpest contradictions of the Obama legacy as well as the unoriginal theatrics of the current electoral season. This statement remains a useful reference to highlight the dominant role of media spectacle and political fiction within presidential elections. Rereading this statement in 2016 is an historical critique of the “hope” Obama promised when he entered into office and therefore an exercise for collectively remembering that moment to help us resist more political wishful thinking in 2016. Finally, this essay helps clarify the political significance of the Unión del Barrio position: “Ni Republicanos, Ni Demócratas – Solo El Pueblo Organizado Vencerá.”

Again, the original version of this statement was published in 2008.

The historic election of Barack Obama as President of the United States allows us to say with certainty that there has been a paradigm shift in the mythology of white capitalist rule. Without a doubt the backwards concept of racial superiority has suffered a blow, although the transfer of political power from one capitalist party to another should not be taken lightly. Race relations have entered a new level of discussion within an empire that built its existence on the genocide of indigenous people, the theft of African labor, and the premise of expansionism under the ridiculous assertion of divine intervention to settle land and conquer people. The significance of the 2008 U.S. presidential election is that for the first time in the history of capitalism, the most powerful country in the annals of human history will be led by a black man. This point signals a decline in the ability of white power capitalism to rule openly and as viciously as it has since its inception. More importantly it signals the need for those that financed the Obama campaign to promote president elect Obama as a beacon of “hope” to keep alive this unjust and decadent capitalist system. In short, we know that president-elect Obama was formed by the elite, and he will rule with the elite, but the historical feat of a black politician winning the presidency of the United States should not be taken for granted.

The election of the first black president of the United States signals a new paradigm of struggle for us as well. Certainly the triumph of Obama cannot, and does not mean that our struggle for self-determination, justice and dignity is now over. Quite the contrary, our struggle must be intensified, it must be unyielding. We are in a time during which the empire finds itself in the midst of the worst economic crisis, a crisis that has propelled the rest of the world into a global economic depression. This is a time were the strategy of endless war has failed, but still remains the only strategy for the empire to plunder the resources of the peoples of the world.

This is a time [the end of the Bush presidency] when our communities are under siege – raided, persecuted, and deported by one of the most sinister campaigns ever launched by the empire within its boundaries. This is a time during which the wall of death has been built all along the borderlands as a damning monument erected by the empire in order to reaffirm its theft of our lands. That horrendous monument not only destroys communities, it divides our people, wounds our collective memory, and it kills with impunity. This is a time of crisis for those in power.

In contrast to their crisis we offer our commitment to struggle, our willingness to be free, our hope for a better tomorrow. During this crisis for the elite, we must seize the moment and transform their crisis into our victory, their weakness into our triumph, their hesitation into our steadfast movement forward. Change only comes when we, those who have been persecuted, exploited, incarcerated, marginalized, disenfranchised, stand together and say “enough is enough,” and demonstrate our ability to resist. The empire is more dangerous when it is wounded, when its ideals are shattered, when its economic systems are in turmoil, still, the United States and its capitalist system has demonstrated an outstanding resilience. On many occasions in the past it has risen out of multiple crises triumphant and empowered, for such is the nature of empire. It can self-degrade to gain strength. Their crisis will not become our victory until we build a movement with enough political strength to once and for all rid our people of the yolk of oppression.

Apologists of the empire, and those scrambling to hold on to the now dilapidated notion of white supremacy will say that Obama as president of the United States signifies the end of class and race tensions in the United States, or marks the triumph of the Civil Rights Movement. Nothing can be further from the truth. Race and class differences have been sharpened to never-before seen levels, while for the first time the white minority ruling elite must address race relations when addressing the political superstructure. The system however is still very much entrenched in white power, it is still resilient, it is still powerful and it will not concede more political space.

This is precisely why capitalism was in need of a facelift and the reason why the Democratic Party has won the contest for control, not only of the White House, but also for Congress. It is based primarily on the capitalist prospect and ability to confuse poor working class people into believing that some change has occurred and that this “change” will represent their interests. We don’t believe this for a minute. Capitalism by any other name is still capitalism, oppression by any other means is still oppression, and colonialism by any other face is still colonialism.

For these and many other reasons the results of this election should not be used to assert that change is coming. We have always stated that both the Republican and Democratic parties are representatives of the ruling class, therefore their interests lie in keeping control of the wealth produced by the working poor. Obama, who was criticized by his opponent for his comments on wealth distribution, reaffirmed his stance by stating that all he wants is to go back to the tax structure of the 1990s. This point is best illustrated in the open thievery which took place last month, as the largest bailout packages in the history of capitalism were negotiated by Congress – a bailout that both McCain and Obama were a part of. The bailout was a safety net for some of the largest corporations and was paid for at the expense of poor people the world over.

There is no evidence to suggest that the election of Obama will fundamentally change the economic problems faced by the great majority of people living within and outside of the political borders of the United States. After all, Obama attended the elite places of learning of the United States; his candidacy was supported by the ruling class of the United States. Obama as president, by itself, does not signify a fundamental change to the reality of working people and oppressed people within the boundaries of the United States – on the contrary, everything points towards the need for the United States to continue the theft of resources of the people the world over in order to rescue and maintain the capitalist economic system. The triumph of Obama, over the war criminal McCain, must be viewed as a weakening of the socio-political understanding of class and race of the empire.

This electoral win for Obama by itself does not guarantee change, although we recognize that the election of a black man to the White House is and event of historic proportions. Now is the time for people of color and working people who live within the boundaries of the United States to unite. The struggle we have before us, beyond this presidential election cycle, is the need to articulate what we mean by change. Our immediate task is to organize ourselves in every community, in every school, in every field, in every factory, hotel, prison, and wherever we may find ourselves. One thing is true, that while the economic crisis continues to escalate, those in power will continue to fire workers, all the while more and more people continue to have their homes stolen by banks in the form of foreclosures.

This is why we support the efforts of those that call for a moratorium on foreclosures, those who call for a halt to raids and deportations, and those that call for reparations for the African community, as well as support for cleaner sources of energy and the elimination of green house gases, and finally the rights of people to determine who they want to marry regardless of gender.

To all workers support efforts to build unions and independent associations at every worksite, free from ICE raids and intimidation by the bosses – your struggles truly signify change. The struggle of women for inclusion and equality in our society, to combat all forms of gendered violence is and must continue to be part of our change. To educators – your struggle to infuse class-consciousness in the classroom despite criminal budget cuts, that is also our struggle. The struggle of the youth and students for education, cultural, social and political participation is our struggle.

The struggle for relevant education and access to higher learning is real change. The struggle for human rights by grass-root community organizations that document migra and police brutality and have organized themselves to promote raids-free communities is the change that we need. To all non-profit workers: your struggle to provide the necessary tools and resources to help grassroots organizations build a movement from the bottom and to the left, and rid social movements of the paralysis generated by the non-profit industrial complex, this is the change that we intend to help build.

To intellectuals and people in academia: your struggle to generate ideas, write our history and analyze our social conditions despite the restrictions, the bureaucracy, budget cuts, and intellectual repression – your struggle is the change that must come. For artists and cultural workers: the canvas, the mural, the musical instrument, spoken word, the body, the written word, la flor y el canto, and to those who continue to use cultural creativity as our most beautiful tool against oppression, this is the change that we must build. To the environmentalists who have struggled against degradation, pollution, health rights, toxic-free communities, yours is the change we must build.

We must unite for self-determination of all oppressed people no matter the nationality. We must unite as a working class people, and our struggle must be an anti-imperialist struggle, based on the struggles of all of us. When that happens, then change becomes possible. Ours is not a change based on empty hopes and happy slogans for a better future, it is based on a need to ensure that all of us build a better community, a better society, and a better world.