Unión del Barrio (UdB) was formed in 1981 by a half-dozen activists as a San Diego barrio-based organization, and has over time transformed itself into a Raza Internationalist formation with Bases of community work in San Diego, Los Angeles, and Davis California, as well as members in other locations.

Over time UdB participated in many actions, conferences, etc., in the Los Angeles area, for example, the August 29th Chicano Moratorium commemorative efforts. However, there was a vacuum of disciplined organization and there was never a fixed Base of UdB members leading on-the-ground actions, campaigns, or community projects in the largest city in the Southwest. It wasn’t until a handful of members that had been living in San Diego decided it was time to plant the UdB flag in Los Angeles and form a Base of community work. 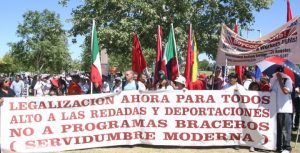 In early 2004, there were initial recruitment efforts to invite LA community members to join UdB. There was a caravan organized to go from LA to San Diego for example, to protest 10 years of Operation Gatekeeper.

Later, in the fall of 2005, Ron Gochez and other graduate students at U.C.L.A began to organize the Raza Grad Student Association (RGSA) on that campus to recruit progressive soon-to-be teachers into forming a chapter of the Association of Raza Educators (ARE). It was this effort that led to several teachers joining UdB that year. In 2005, a Base of UdB was formed with a group of cadres from Oxnard and Los Angeles. For the first couple of months, meetings were held in both cities alternating location from month to month.

2006 was a critical year where raza repression came down hard rooted in neo-Nazi elements of the Republican Party taking power, and simultaneously the Democratic Party cowering away from struggling against these neo-conservative tendencies.  During this year other repressive measures, such as the racist U.S. congressional bill HB-2281 were directed against our and communities and across the U.S. protests began against the bill. In Los Angeles it started with several large demonstrations, later termed the “Mega Marchas”, where UdB played a central role in the unity of like-minded organizations in pushing a left analysis into the discussion on immigration reform. Out of that, Unión del Barrio began to grow as compañeras/os working in the educational field began to recruit students and youth into community struggle, most notably coming from M.E.Ch.A. chapters in local high schools. There was a concerted effort to form a student coordinating body known as Coordinadora Estudiantil de La Raza, which united multiple student organizations, mainly from the South Central LA area.

In September of 2006, now with enough members to sustain momentum and create on-the-ground projects, a second grouping of LA members formed and established a new Base of UdB. The first event organized was to host a speaking visit by Chairman Omali Yeshitela of the African People’s Socialist Party (APSP), an ally organization of UdB for the past three decades. The significance of this visit resonated as comrade Yeshitela provided an honest, non-duopoly tainted analysis of the current situation, and speaking to unite Black and Brown struggle in Los Angeles.

As 2007 began one of the first efforts of the new LA Base of UdB was the establishment of the Frente Contra las Redadas (FCR) which became an organized force for combatting ICE/migra raids and deportations, and later would lead into building a broader coalition forces. Along with the FCR, the first newsletter in Los Angeles published by UdB began and was called “Tierra y Libertad” to be circulated on the streets of LA.

Drawing from the experiences of the FCR, in 2008 UdB joined the effort in establishing the Southern California Immigration Coalition (SCIC), which would galvanize independent organizations to continue to push for an end to mass raids and deportations. The SCIC challenged non-profit analysis that was often a sounding board for the Democratic Party, supplementing feeble efforts to enact “comprehensive immigration reform” instead of “legalization for all.” The SCIC would also move toward pushing for licenses for all, and for calling out the state-sponsored theft of vehicles taken from undocumented and poor working people at police checkpoints, a practice of state sponsored looting in barrios throughout LA. The SCIC would for the next six years operate as a strong alliance that would respond to and address issues impacting undocumented communities. That year UdB also called for a slate of candidates from the community to run for the South Central Neighborhood Council (SCNC) as a space to build community power at the local level. The campaign for the SCNC was victorious by a landslide, and resources won from this effort have assisted in organizing important community political, social and educational events. 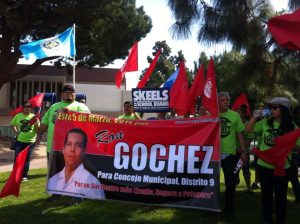 It was around this time in 2013 that it was decided that UdB would spearhead the campaign to elect Ron Gochez to City Council District 9, and directly challenge the status quo by entering the space of electoral struggle. That campaign forced mainstream politicians to discuss and address the burning issues raza and Black communities. It brought issues related to poverty to the forefront of the campaign. Although Ron Gochez was not elected int he end, it was clear that UdB had engaged in this space os struggle as an independent force to be reckoned with. The Gochez campaign was run strictly with volunteers and with minimal amount of resources. This brand of liberation politics had not been seen in LA for several decades.

Through these efforts, under the banner of “the People’s Campaign,” UdB gained respect and credibility from other activists, organizers and the community as a whole that witnessed the effort. Many ultimately joined in and supported the campaign. Drawing from the experience of the People’s Campaign in CD9, UdB decided to engage in a campaign to elect Jose Lara to the Pico Rivera School Board, where, after several months of hard work the Jose Lara election campaign allowed many UdB members to learn how to direct broad campaigns, from which the Ethnic Studies Now Campaign later emerged.

For the past couple of years, UdB has grown, both in its membership, but also in its capacity to organize, and it’s membership has diversified into a multi-talented force. From one Base, the organizational efforts expanded into the establishment of two more UdB Bases, one centered on organizing the around the issues of education, the second Base centered around the issue of youth and students. This new UdB organizational format would allow for our members to more easily focus and organize around specific critical issues facing our gente. Ongoing organizing and a difficult transition caused some members to leave the organization, while new members were would come in. 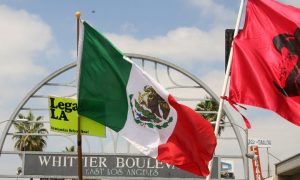 In 2015, UdB made the decision to take the lead and organize a May Day action, which brought together nearly 1,000 people with a militant working class program of speakers, and a non-permitted march took place starting from MacArthur Park through the streets of downtown ending at the Los Angeles Police Department headquarters. Also, in the summer of 2015 UdB launched Escuelita Aztlan (EAZ), as an alternative community based educational program to advance Raza Studies and develop organic community youth leadership.

This year in 2016, UdB along with MEXA de East LA College (ELAC) and the Brown Berets, organized a protest against war-monger Democratic Party presidential candidate Hillary Clinton when she came to ELAC on Cinco de Mayo to pander for support from our community. She was met with a force of about 1,000 protesters that forced her to cut her visit short.

Many lessons have been learned during this past decade of organizing in Los Angeles. We have looked to our comrades in San Diego, who for over three decades have sustained UdB in that border city. We have looked to other spaces of resistance, such as the efforts in Oxnard, where for nearly 15 years, a handful of organizers assisted in creating a culture of Raza Resistance. We have looked to the South – to Mexico, to Central America, to Sur America, and the Caribe for inspiration, guidance, and for lessons on how we should wage struggle here within the belly of the beast.

We have looked beyond what is now known as the Non-Profit Industrial Complex (NPIC). The NPIC is a set of either state-funded or privately funded efforts that allocate resources to what has been coined as “social justice” causes, so long as the demands do not stray outside of the parameters set by their funders and the capitalist/ imperialist system itself. The NPIC discussion and its limitations, deserves a longer, deeper discussion which we will address in subsequent articles. For now, we will note here, that UdB’s efforts in LA will be focused on building alternative sources of how we can fund our own projects and campaigns. Here, we stress the importance of also organizing outside liberal Democratic Party tendencies, which we see as ultimately a graveyard for social movements and independent grassroots organizing. 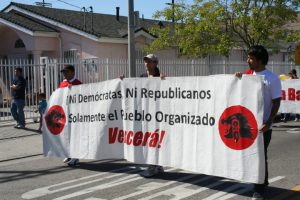 Unión del Barrio has come a long way with a relatively small, but highly committed membership, that operates under a principled and revolutionary socio-political analysis. Unión del Barrio’s work is focused on the needs of the people and not what benefits the establishment. We reject both imperialist political parties (democ-ratas and republicanos), and we refuse to stay within the constraints of the non-profit model of “professionalization” of social struggle, which has been the norm in Los Angeles for too many years. As UdB continues to grow, so will the visibility of hard hitting revolutionary perspectives to counter the opportunism primarily spread through organizations that too often have a hidden conflict of interest.