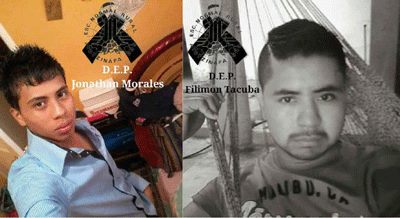 Unión del Barrio laments the pain felt by the families of Filemón Tacuba Castro and Jonathan Hernández Morales. Furthermore, from local authorities, to the President of the republic, Enrique Peña Nieto, we hold the Mexican government responsible for this most recent crime. The Mexican government has continues to promote and maintain a policy of state terrorism, that has imposed the specter of death across Mexican society in general, and upon the student teachers of Ayotzinapa in particular. Once again, this is evidence of how a narco-government, rotten and corrupt from the inside, harbors murderers, while it has absolutely nothing to offer the Mexican people. This government has clearly become an enemy of the people, since December of 2008 and the beginning of the genocidal war under the Plan Merida.

Unión del Barrio, a political organization of Mexican and Latin American people organization that reside north of the border, unequivocally condemns these acts. What happened yesterday, suggests that the Mexican State remains complicit in fomenting a climate of terror and violence directed against this teacher’s school in particular. Almost exactly two year have passed, since the most terrible crime was perpetuated against those who resisted the educational reforms of the current government administration, two years replete with claims for justice and the return of the 43 missing Normalista students.

Unión del Barrio, in partnership with other organizations, received the detestable news of the two most recent murders at the moment of bringing closure to an informational tour about violence in México; and effort that included the testimony of a student from the Ayotzinapa Normalista School, in addition to human rights activists from the states of Guerrero and Chiapas.

Unión del Barrio will continue to advance our struggle, and will continue to demand justice, and we will not stop until we see that those responsible for so much pain and death, are made to pay for their crimes. We are with the vast majority of the Mexican people, who have been fighting, and will continue fighting against this neo-fascist regime – a regime that we must oppose, by any means necessary.