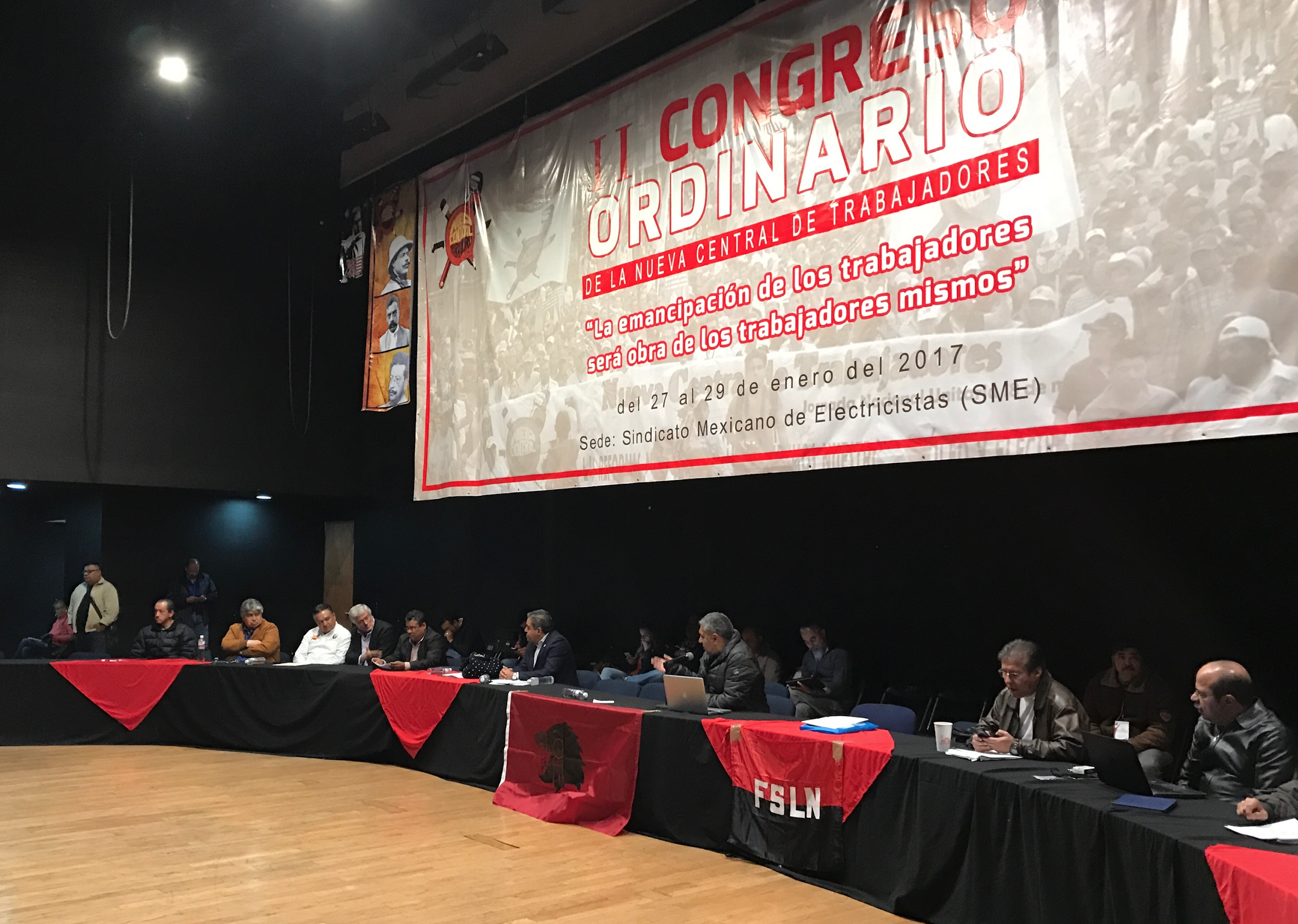 As representatives of sister organizations of various countries, continental organizations, and international delegates to the II Congress of the Nueva Central de Trabajadores de México, we declare full solidarity with the fight of the people of Mexico to defend their sovereign rights and reject the intention of Trump to construct and expand a wall long the international border. The president of the United States and has already affirmed his intention to build this wall, which is similar to the wall that was built by the israeli regime in the occupied territories of Cisjordania, Palestine.

We understand that this wall is an attack against all peoples of Nuestra América, thus we actively condemn the aggression of the United States government, which has its eyes set against the Mexican people, but also set against all of our peoples.

Trump’s aggression is part of a capitalistic offensive against all workers throughout the world, and which under these new conditions intend to deepen the exploitation of the labor force, and increase the plundering of our common goods to meet the demands of continued profitability and the concentration of more capital.

The Trump government constitutes a threat for all the peoples of the world, exacerbated by the military character of US imperialism, and therefore it sets out to directly subjugate Cuba, Venezuela, and any project that tries to dispute the capitalist order.

Trump is an expression of the political crisis in the USA and the capitalist system in general. It was defeated by the popular vote, and rose to power thanks to the electoral college. The popular mobilizations seen throughout the region demonstrate the rejection of this government by an important part of society.

In actuality, both candidates who compted for the presidency represented the interests of the dominant classes of the USA, and because of this they give relevance to social movements that grow in the streets, and the capacity to build within the USA a program for rejecting the reactionary process of the Trump administration.

Trump activates at this time the contaminating production of petroleum and encourages the persistence of the hegemonical character of the capitalism, which is based on the criminal speculation that unites the petroleum industry. Transnational biotechnology, food, banking industries and its speculative business also operate to the detriment of the conditions of life of our peoples.

From this land of revolution, we declare a complete rejection of the discrimination and racism exercised by Trump against Mexico, and we prepare ourselves to struggle in front of the US embassies in each of our territories.

We declare that the reactionary proposals of US government are possible by the complicity of the various governments of the region, with the support of the dominant classes to disrupt our resistance and prevent the deployment of our plans for social emancipation.

Our solidarity statement calls for the unity of workers to confront the Trump government and all imperialist attacks while generating the conditions for national and social liberation in each of our countries.

Only then can we maximize the integration of the best practices in the region, against imperialist domination and any form of economic liberalization through free trade agreements.

We call for the unity of workers, trade unions, social movements of our people, to fight against capitalism, imperialism and work towards the construction of a just and solidary society.