Deception, war, criminality, and terrorism have been used as instruments of empire for hundreds of years. US imperialism has not been an exception, fomenting political chaos and death across the globe, especially in the decades following World War II. Yet, the shamelessly ahistorical nature of trumpista fascism makes it too easy to forget the origins of the current drug war that is devastating Mexico. To help us get beyond the racist buffoonery of who “will pay for the wall,” Unión del Barrio offers the following summary timeline that tracks the evolution of the “War on Drugs” and its convergence with the “War on Terror.” 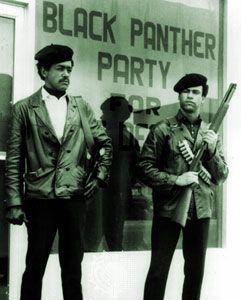 In a global context when national liberation and political revolution were the dominant trends across the “Third World,” radical movements developed even within the borders of the United States. It was during this period that the CIA & FBI established COINTELPRO, a federal program designed to neutralize political organizations like the American Indian Movement (AIM), the Black Panthers, and the Crusade for Justice. Using informants, provocateurs, and direct violent repression, black and brown “power” movements were crushed in order to defend the status quo within the US.

Having quelled the revolutionary fervor that defined the 1960s, COINTELPRO was redirected to include clandestine government activities to help flood black and brown barrios with hard drugs in order to pacify domestic social and political activities. Simultaneously, the US government declared a public “war on drugs” and initiated a campaign of police violence and mass-incarceration against black and brown barrios while drug abuse and drug-related crime spread rapidly. 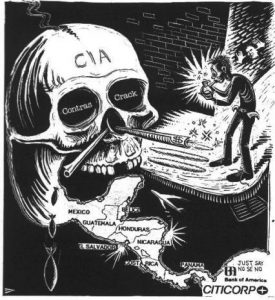 The CIA directed profits from drug sales to train and arm right-wing military dictatorships, death-squads, and ongoing counterinsurgent wars throughout Latin America. COINTELPRO-era criminal drug-trafficking organizations received military aid and training from the US, and were subsequently identified in the US mainstream media as “freedom fighters.” US policy focused on promoting civil wars where there was no Latin American dictatorship already on the ground to support. Where there was no dictatorship, and civil war was not viable, US policies propped up puppet governments that agreed to turn a blind eye to what US agencies and allied criminal organizations (aka “freedom fighters) were doing throughout Latin America. Hundreds of thousands of people were tortured and killed in Brazil, Chile, Colombia, El Salvador, Guatemala, Haiti, Honduras, Nicaragua, Panama, and Paraguay. The consequences of these policies were especially devastating for Central America.

Latin American dictatorships receded and their drug dealing death squads were legitimated across a region that had been largely “pacified” in preparation for the rapid expansion of US-based neoliberal doctrine (the “Washington Consensus”). The Mexican government under Carlos Salinas de Gortari offered Mexico’s unconditional surrender to the “Washington Consensus” when he signed on to the North American Free Trade Agreement (NAFTA). There was a problem though: Mexico had not yet been “pacified,” and there were multiple armed resistance movements operating throughout the country that threatened the smooth consolidation of Mexican neoliberalism. Illegal drugs were identified as one potential solution to the problem of political “pacification” in Mexico. In other words, official neoliberal policies coincided with the merger of Mexican state power and the power of Mexican drug cartels during the 1990s. The Mexican government, with tacit support from US government and intelligence agencies, institutionalized the political and economic power of the main drug cartels, thereby diverting primary control of the US market for illegal drugs away from Colombia, and passing this dominant position to Mexican cartels, including a young “Chapo” Guzmán. Within the US, covert activities directed by the CIA and FBI that had helped limit the movement of hard drugs to stay within black and brown barrios were pulled back, and the US market for illegal drugs was expanded to every part of the United States. This was one pretext for the US government to begin the militarization of the US/Mexico border, and the Mexican government began to militarize the Mexico/Central American border. 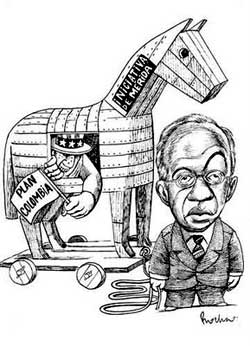 The drug economy was consolidated in the US and Mexico as the “illegal” side of NAFTA: within the US, drug addiction dramatically increased, newly privatized prisons were filled beyond capacity with (primarily black and brown) drug offenders, black and brown barrios were largely pacified, and drug profits skyrocketed. Within Mexico, soaring drug profits rivaled and then surpassed Mexican oil exports, tourism, and remittances. The Mexican government allowed the increasingly powerful drug cartels (which to that point had been largely confined to Sinaloa) to operate freely within those areas of Mexico known to be most politically active: Chiapas, Chihuahua, Guerrero, Michoacán, Oaxaca, etc., and drug-related violence began to spread across Mexico. With Plan Mérida, the Mexican government supported the expansion of US military and intelligence operations throughout Mexico under the guise of the “War on Drugs.” The US government expanded the militarization of the US/Mexico border, and the Mexican government intensified the militarization of the Mexico/Central American border. Furthermore, in the wake of the 9/11 terrorist attacks the US government and mainstream media conflated the new “War on Terror” with the old “War on Drugs,” thereby strategically unifying what to that moment had been distinct policies of imperialist power deployed against the Middle East on the one hand, and Latin America on the other.

Mexico became a massive killing field. The Mexican government, with direct financial and military support from US government and intelligence agencies, escalated the “War on Drugs” that has so far has claimed the lives of at least 200,000 people in Mexico. A tsunami of crime and violence has blanketed Mexico and Central America. The “illegal” side of NAFTA has reached its apex:

Donald Trump mobilizes anti-Mexican hatred as the central theme of his presidential campaign, and he wins. In what may be among the greatest of all ironies, Trump now threatens to pull the US out of NAFTA because, he argues, it has primarily benefitted Mexico to the detriment of the United States. Trump demands that a huge wall be built to keep out dangerous Mexicans that bring drugs, crime and rape into the US. As if this were not enough, on April 27, 2017 Senator Ted Cruz, Trump’s most gutless lapdog, made a proposal that if the Mexican government refuses to pay for the wall, the US government is within in its right to confiscate El Chapo’s drug money now that he is imprisoned in New York.

This is the shameless dishonesty of US “narco-imperialism” – it undermines and destroys everything that might pose a threat to US neoliberal power in Latin America (especially any form of leftist national liberation movement), monetizes the destruction and chaos it leaves in its wake, and when the terrible consequences of these policies are spread beyond the originally intended target, US political opportunists immediately blame and demand the punishment of whatever poor black and brown people are nearby, and thus they start the cycle over again from the beginning. These were the methods applied by US “narco-imperialism” throughout Latin America, but the strategy was replicated throughout the Middle East, except instead of trafficking in drugs, US imperialism in the Middle East has for decades been trafficking in religious fundamentalism.