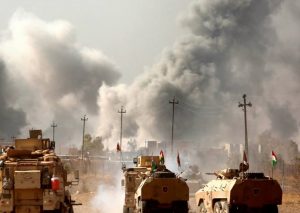 Unión del Barrio condemns the imperialist U.S.-led attack unleashed against the Syrian people, and we denounce what is the most recent grotesque display of naked euro-anglo colonial violence against the Arab people. We recognize the right of the Syrian people to self-determine their political future, and we expose imperialist machinations to violently remake Syria in the image of Iraq – that is monetized chaos in support of Israeli interests in the region, and to secure the theft of their natural resources.

The only solution that will bring an end to the Syrian crisis (and crisis throughout the Middle East), is the immediate expulsion of all imperialist powers from the region, the popular removal of all reactionary/neocolonial puppet governments, and the re-appropriation of the natural wealth of those countries in the service of those people who are indigenous to the Middle East.

Unión del Barrio further condemns U.S. hypocrisy when it comes to the use of chemical, biological, conventional, and potential nuclear warfare. We must first demand an answer to the following questions: What country on earth is the largest manufacturer of weapons of war and profits the most from the perpetual wars in the Middle East? Is it the United States? What country has monetized warfare and chaos to such a degree that it spends at least $700 billion a year on a globalized war economy – more than the next seven countries combined.