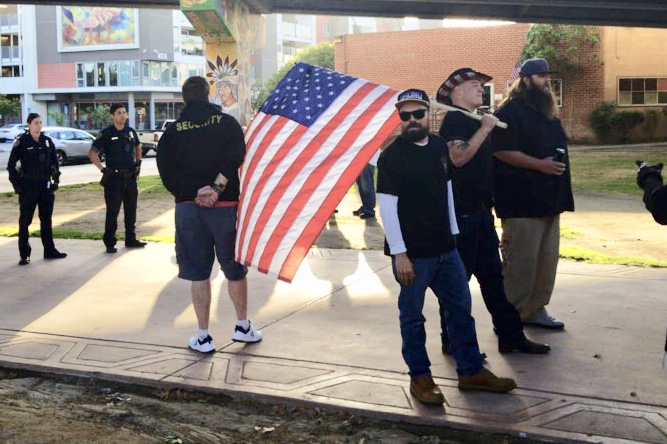 At approximately 5:45 pm on Wednesday May 1, 2019 at least six fascists from the so-called “Proud Boys” organization attempted to enter the kiosko stage area in the center of Chicano Park, 30 mins before the SD May Day Marcha was set to arrive in the park after having marched from downtown. The “Proud Boys” is a white nationalist organization known for provoking acts of right-wing violence across the U.S.

There was also an unusually heavy presence of the San Diego Police Department, under the command of two sergeants who were observed engaging in friendly conversations with the fascist Proud Boy provocateurs. At approximately 6:00 pm members of the May 1st Coalition security team informed both the SDPD and members of the Proud Boys that no disruptions of the May Day rally would be tolerated. SDPD sergeants who were in command then proceeded to threaten multiple members of our security team with arrest.

At 6:10 pm, members of Unión del Barrio, the Brown Berets de Aztlan, the PSL, and May Day security volunteers formed a defensive line between the fascist Proud Boy provocateurs and the Chicano Park Kiosko, and then proceeded to block the advance of the fascists into the center of Chicano Park. It was at that point where physical violence ensued and SDPD was ordered to intervene. Instead of removing the fascist provocateurs from the park, SDPD proceeded to pepper spray multiple members of the May1st Coalition security team. AIM SoCal directed the medic support for the compas from security who were pepper sprayed by the SDPD. It was only after the violent confrontation had ended that SDPD decided to escort the fascist provocateurs back to their vehicles. We are sharing this information online for the following reasons:

Any updates regarding this incident will be posted on our social media accounts.