The current historical moment requires humanity to build a united front to address the global pandemic (COVID19), by ensuring that everyone is able to access healthcare to survive the virus and to overcome the privatized, profit-driven health care system in the United States.

Workers are the producers of all material wealth, and our health must be given full priority in this moment and moving forward. We reject the corporate welfare state that is currently administering the political response to this world-wide crisis by bailing out corporations and transferring the economic weight of this global health crisis on the backs of working people. 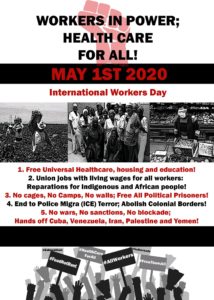 The current health crisis has exposed the inefficiency of the privatized health system. Workers demand an immediate prioritization of our tax monies to be used to ensure all members of society are able to access quality, public health services as it constitutes a fundamental human right.

The speculative nature of real estate has manufactured a housing crisis in California and throughout the United States. We assert that Housing is a Human Right and we all deserve affordable, accessible, safe and healthy housing, including restored utilities for families who had them shut off before the stay at home orders.  We demand an end to developer control and speculative real estate practices.  We demand cancellation of rents for the duration of the crisis, cancel rent debt accumulated from the crisis, freeze rent increases and house the homeless. Rent Control Now!

The public-school system is being defunded to respond to the privatization of education via the charter school movement. Cancel all student debt and make College/University education free.

2) Union jobs with living wages for all workers: Reparations for Indigenous and African people.

The levels of worker exploitation continue to grow with grotesque levels of wealth inequality never seen in human history. The origin of these grotesque levels of wealth accumulation and inequality was the system of slavery and genocide of Africans and Indigenous people; we demand reparations for the crimes of the capitalist system. The capitalist class is shifting all the weight of the health crisis on the backs of workers, especially the essential farmworkers who feed society. We demand Union Jobs with Living Wages.

WE WILL NOT DIE FOR THE SURVIVAL OF CAPITALISM!

3) No cages, No Camps, No walls; Free All Political Prisoners!

The for-profit concentration camps set-up by private companies along the border and throughout the United States are breeding grounds for COVID19 and constitute death traps for detainees. All resources must be directed towards public health priorities, and not colonial borders. We demand the immediate closure of all detention centers and prisons. We especially call on the immediate release of all political prisoners including Mumia Abu Jamal, Leonard Peltier, Ramsey Muñiz and all other political prisoners held under capture.

The police, operating as the coercive arm of the capitalist class; persecute the working class, especially if you are a migrant worker. African and Mexican indigenous people continue to be disproportionately criminalized in this country. We reject the over policing, the persecution of working families by ICE and the systematic death and suffering that colonial laws, political borders, and police impose on working class families.We demand Community Control of the Police, Abolishment of the Racist Migra (ICE and Border Patrol), The demilitarization of the US border with Mexico.

5) No wars, No sanctions, No blockade; Hands off Cuba, Venezuela, Iran, Palestine and Yemen!

The United States is weaponizing COVID19 pandemic by tightening unilaterally imposed economic, financial and commercial blockades on nations that disagree with US imperialism. These blockades are meant to cause profound suffering to the people of these nations as a means for so-called “regime” change. These commercial, economic and financial blockades constitute a policy of genocide against people and nations. We uphold the right to self-determination for the peoples of the world, and Demand an end to the US blockade of Cuba! Solidarity with the Cuban International Medical Brigades; No War on Venezuela or Iran!