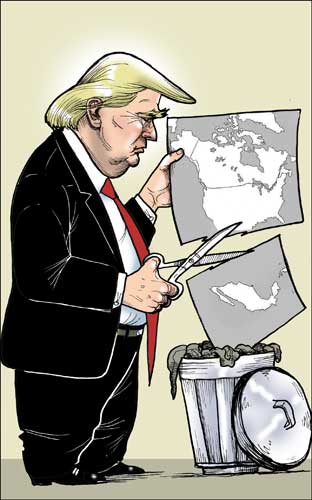 Since it was imposed in 1994, NAFTA destroyed the Mexican countryside and made the Mexican economy completely dependent on the US economy. This destruction provoked a massive migration of Mexicans to the United States. Carlos Salinas de Gortari and Bill Clinton knew perfectly well that NAFTA would provoke more migration, that was why 1994 was also a key year for the militarization of the border – Operations Gatekeeper, “Hold the Line,” etc. were also introduced during the same period. Truth be told, NAFTA is the root of the border crisis that exists today.

Only the sell-out Mexican ruling class benefitted from NAFTA; it is how some of them became the richest people in the world. In exchange for this new super-wealth for a few, the vast majority of Mexican people were converted into a massive migratory labor pool, dehumanized and treated as disposable by both the U.S. and Mexican governments.

Now Trump demands that Mexico “renegotiate” NAFTA. He argues that Mexico has been “taking advantage” of the USA. What does the sell-out Mexican ruling class do? They prepare the negotiating table for the arrival of their new boss Trump. The sell-out Mexican government does not defend the Mexican people, instead they are intent on collaborating with Trump to collaborate with him as a junior partner and test how much more they can squeeze out of the Mexican people.

We must get organized! Building a popular organization, independently committed to the people is truly the only option we have.