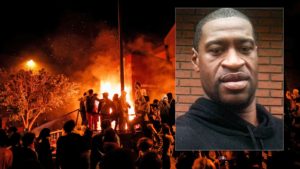 Unión del Barrio sends our sincere condolences to the family of George Floyd, and we state our solidarity with protesters in Minnesota who are standing up against police terror. We unite with the international condemnation of Derek Chauvin and the Minneapolis Police Department for the blatant lynching of brother Floyd. We call for the arrest and conviction of Chauvin and all the officers who were accomplices in the killing of Mr. Floyd. Anything short of being found guilty of murder will be yet another example of police impunity and another injustice against African people.

We call on Mexicans, Central Americans, South Americans and all Indigenous people to unite with Africans to demand justice for brother Floyd and all victims of police terror. History teaches us that for over 500 years, African and Indigenous people continue to face genocidal attacks on this continent. Today, that legacy continues – as clear as day – in the form of capitalist law enforcement, state repression, and even in COVID-19 policies and infection rates. Africans, Raza, and colonized people in general suffer higher rates of exploitation, arrest, imprisonment, police murder, and COVID-19 infection/death in this country. The entire state apparatus (laws, courts, police, politicians, educational system, healthcare) was designed to monetize our oppression, and to keep us at the bottom of the social, political and economic strata.

On May 28, 2020, Trump publicly admitted the true nature of his fascist agenda. In response to the protests against the murder of brother Floyd happening all over the country, Trump tweeted that “…when the looting starts, the shooting starts…” This reactionary statement is giving police the green light to murder anyone who decides to participate in street protests. That is fascist state repression. We uphold the right of the people to use any means necessary to defend themselves from state terror. It is painfully clear that from coast to coast, police officers, sheriffs, highway patrol, and ICE agents have demonstrated that they have no problem attacking and killing men, women, children, elders, people with disabilities – anybody.

Exactly 5 years ago we published a statement about police terror and the uprising in Baltimore:

We know that the rage spilling out onto the streets of this city is rooted in the historical repression of the Black community and was sparked by the recent wave of police killings of Black men… Police and migra violence must be understood as a form of political power imposed on our communities through violence – otherwise known as state sponsored terrorism. Police killings are rarely analyzed as a function of political power – this is the line that is not usually crossed, even among many progressive-minded people. It is an historical fact that state sponsored terrorism is used by the powerful to defend their privileges and to repress and contain the powerless. Killer cops and killer migras will never be held accountable precisely because they serve state sponsored terror. Killing people in our communities is part of the job of policing. This is why cops come into our communities with guns and spend hundreds of hours training to shoot guns. The poorer and darker skinned a community, the more police and more guns are deployed. If a community resists the police, they come in with even more police and even bigger guns. This is a pattern that is as simple as it is historically consistent.

If we don’t call it for what it is, then we limit ourselves to parroting sterile debates as framed by media personalities, democrats/republicans, and representatives of social service agencies. Consequently, we also limit ourselves to demanding the same short-term reforms, inevitably condemning ourselves to more state terror a few weeks or months down the road from now, when the pattern is then repeated. Inevitably, another innocent member of the Black community is murdered by the police. As before, we will endure weeks of so-called “analysis” and “debate” within the media, so that we can “begin the healing process.” Loyal critics of the US political system then demand resignations, reforms in policing, greater diversity among police, and funding for a few social programs…

We must not limit ourselves to more of the same ineffective solutions offered by liberal politicians or media commentators. The only way to challenge police/migra violence (and attend to the dozens of other urgent needs of our communities) is to build dual and contending power that demands collective organization… We stand with the Black community… We uphold our decades-long fraternal relationship with the Uhuru Movement as a path to Black Power… We know that if we truly want to bring about substantive political change to our peoples, we are going to have to be AT LEAST as organized as those institutions that are used to repress our communities.”

We acknowledge the justified expressions of anger and desperation, but they are not enough. Rationalizing these expressions of anger and desperation is not enough. History teaches us that large uprisings such as those in Watts (1965), Los Angeles (1992), Ferguson (2014) and Baltimore (2015) were important uprisings that marked desperate times and conditions in our communities, but due to the lack of an established organization and leadership, ultimately the anger of the people did not lead to substantive, long lasting change. The great majority of the thousands of people who participated in those actions did not belong to any organization. Consequently, after days/weeks of protests, everyone went back to their normal lives and the ruling class that was in power before the protests, remains in power to this day. Imagine if even a quarter of the protesters in any of those cities were part of a movimiento organization. They could have continued to have meetings, created a strategic plan, continued to inform the community and encouraged them to join/build a revolutionary movement.

We issue this call to everyone who is tired of these oppressive conditions, and who wants to get serious about seeking justice. You need to join a serious political organization. Voting is not enough. Zoom events are not enough. Expressing your frustrations online is not enough. Being a committed individual activist and protesting is good, but that alone will not bring about fundamental change. Join Unión del Barrio. Join the African People’s Socialist Party. Join the Brown Berets de Aztlan. Join the American Indian Movement. Join political organizations that are doing real work on the streets of your community (not the democratic party). If there are no revolutionary organizations in your area, contact us and we will help you start one. Let’s build a revolutionary movement that can rally the strength to overturn the existing structure of political and economic power that locks our people down at the very bottom in order to sustain itself. The current system is killing us, and it will not stop until we stop it. The murder of George Floyd and the burning of Minneapolis this May 2020 is clearest evidence yet that in the midst of a global health, economic, and political crisis, this system has NO redeemable value. Let it burn.

The people united, will never be defeated!

All Power to the People!