Unión del Barrio recently responded to the call issued by the Bolivarian Socialist Workers Central Union (CBST), to attend the 1st International Meeting of Workers in Solidarity with the People and Government of Venezuelan, which took place from August 29-31 of this year. We affirmed our commitment with the international working class to close ranks against a hostile U.S. administration that is threatening open invasion, war, and occupation of Venezuela. The participation of Unión del Barrio was a follow-up to the debates and agreements that took place at the Sao Paulo Forum, which was also held in Caracas, Venezuela this July.

Revolutionaries of the world recognize that today two economic models are in open dispute: on one side, the model of parasitic and destructive capitalism; and on the other we have the solidarity and social equality based economic model of socialism. The epicenter of the contention between these two models is now being waged between the United States and the Bolivarian Republic of Venezuela, whose interests are diametrically opposed.

With American imperialism being led by the multi-millionaire Donald Trump, it intends to impose a government of the oligarchy represented by its lackey Juan Guaidó, in an attempt to crush Venezuela into a country that is subordinate to the interests of international finance capital (banks and the Wall Street stock exchange) and to boost the U.S. economy from the negative consequences of its structural crisis by stealing the natural resources of Venezuela (oil, gold, coltan, etc.). These intentions feed into a broader plan to maintain global economic and political hegemony and dominate international markets. The primary method used by imperialism to subordinate and subdue Venezuela is through force, reverting to the Monroe Doctrine as an international instrument that proclaims all “America for the Americans” – a slave and colonial concept that bets on a unipolar world (the idea of a single dominant power in the world: USA). 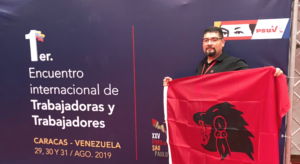 On the other side, the Bolivarian and Chavista ideology bets on a society with Participatory Democracy, where workers are the central protagonists in the development of the economy and the consolidation of socialism. The socialist model has as its foundation the productive force of the working class, and nationalization of the natural resources to be used for the equitable distribution to benefit the entire population. The Bolivarian Revolution has used its immense natural resources at the service of those historically excluded and prioritized social programs to ensure that all Venezuelans are guaranteed health care, education, housing, food, culture and the full enjoyment of Human Rights. The objective is to create a society based on the concept of “Buen Vivir”, where human beings can live in equilibrium with nature, sustain peaceful co-existance with each other, and live in peace. This model, implemented since 1998 with the arrival of Hugo Chavez to the presidency of Venezuela, proposes a multi-polar world (multiple centers of power worldwide) as a tool to counter US military and economic power over the small economies that are usually consumed and looted by global capitalism.

The following statement represents the perspective of the international working class that diagnoses the current historical, economic, political and military situation that now confronts our region; it is meant to mobilize the entire international working class to defend the sustainable and democratic model of socialism against theft, looting, sanctions and war that the United States intends to impose on the Venezuelan people.

Unión del Barrio unites with the struggle for peace, a multi-polar world, respect for the sovereignty of the Bolivarian Republic of Venezuela, and a democratic and socialist world. We assume the task of uniting our community to join the rest of Latinameica and demand an end the ilegal and genocidal economic, financial and commercial war that the United States is waging against the Bolivarian Republic of Venezuela. 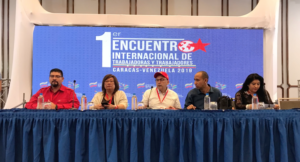 The workers gathered in the city of Caracas, capital of the Bolivarian Republic of Venezuela for the “First International Meeting of Workers in Solidarity with the Venezuelan Government and People,” after the deliberation process we came to the following conclusions:

Today’s world is marked by the globalization of capital. The current character of capitalism is assuming an unprecedented voracity that affects the working class and humanity as a whole. Neoliberal capitalism has engulfed the world economic-financial system, pursuing a ceaseless search for profit through the conquest of new markets. It strengthens the dominance of finance capital and intensifies the plundering of nations and the exploitation of labour.

At present, US imperialism is capitalism’s staunchest defender. Our America is the main theatre of operations where it undertakes its offensive to maintain its global hegemony and impose its model. The restoration of neoliberalism on the continent means that Latin American and Caribbean states suffer the threats of unilateral use of force to the effective loss of their sovereignty. The region’s natural environment is currently suffering the destructive ravages of neoliberalism. The working class, specially women and children, are increasingly being exploited. Migrants are being persecuted with xenophobic policies. Democracy is being progressively undermined under the tutelage of supranational organizations that endorse US foreign policy.

In this context, the Bolivarian Republic of Venezuela has become a bastion of dignity. Since the arrival of Commander Hugo Chávez to the Presidency, the country has developed a policy of social inclusion that has put an end to neoliberalism. In Venezuela, a new model of coexistence is being born, a determined anti-imperialist resistance is being waged and a different approach to public affairs is being developed beyond the neoliberal dogma. This anti-systemic struggle together with the defense of sovereign right is expressed in an independent Bolivarian-inspired foreign policy that aims at a multicentric and multipolar world.

This is a liberation project adapted to the new times, aimed at greater social justice, which has already shown that the redistribution of wealth and full sovereignty in the management of energy resources, among other advances, are facilitating great achievements in social policy. In addition, a vigorous participatory democracy has been forged, and collective participation is emerging as a characteristic of the new way of doing politics that is surfacing in people’s power organizations.

In keeping with the ‘Plan de la Patria’, the programme of the Venezuelan transition to socialism, the Workers’ Productive Councils have been created as part of an initial model of public management, in order to help with the economic-productive diversification of the country and, in this way, to deal with the pernicious effects of the economic war unleashed against the Venezuelan people. Such councils are part of the democratic conception that assumes the working class should play a leadership role in the construction of Bolivarian socialism.

In fact, with the recent creation of a Vice-Presidency for the Working Class in the United Socialist Party of Venezuela (PSUV), workers are already seeing new challenges and a range of possibilities are opening up for the working class to influence the leadership of the existing process of change in the country. It should also be noted that within the framework of this project, the workers have come up with a Bolivarian conception of the Security and Defence of the Nation, which has brought about the creation of a Workers’ Militia to assume an integral resistance against imperialism and its neoliberal model.

The Bolivarian process has created conditions using general public policies and specifically the Labour Law, that vindicate the working class. The Venezuelan revolution, with its irrefutable successes and in spite of its errors, encompasses a true attempt at social inclusion, an egalitarian aspiration in a full gestation period, a commitment to the most needy, that is to say, an emancipatory work in process aimed at vindicating all those who have been historically excluded and exploited.

Undoubtedly, the Bolivarian Revolution is ferociously attacked for its initial success in the redemption of the humble, for its irreducible dignity, for the hope it currently means for the peoples of the world and for its projection towards socialism. This feat is a heresy in the eyes of the powerful of the world, a danger to neoliberal plans and a challenge to the Monroe Doctrine that they intend to impose from the north on the continent.

For these reasons, the White House is articulating an unconventional war against Venezuela whose purpose is to overthrow the government of the Constitutional President of the Republic, Nicolás Maduro, as an imperative step to exterminate Chavism, end democracy and seize the wealth of Venezuela. In keeping with these plans, they have implemented a diverse set of unilateral coercive measures, they threaten to invade the country militarily and with exceptional force, they apply an inhumane economic, financial and commercial blockade that aggravates the country’s problems. This translates into substantial losses that prevent the acquisition of food, medicines, inputs for production, raw materials, among other items essential for the population.

The Lima Group, the Pacific Alliance, the Organization of American States, the presence in the continent of the North Atlantic Treaty Organization, the IMF, the World Bank and the several US military bases are the preferred instruments of imperialism as an integral part of the strategy to subdue Venezuela and culminate its geopolitical bid to dominate the continent. In other words, the White House permanently violates public international law in its offensive aimed at ending the cycle of progressive or revolutionary governments on the continent. The geo-strategic plans of imperialism in the region are aimed at perpetuating neoliberalism with the objective of plundering its natural wealth and continuing to exploit the region’s workers.

However, the Venezuelan people and the rest of the peoples of Our America resist, fight and stand as an anti-imperialist challenge that has already dealt important setbacks to the policies of the White House. Alternative projects have guided the struggles that germinated in progressive or revolutionary governments and are today real challenges to the hegemonic pretensions of the United States, and a geo-strategic concern for its power elites. Far from the end of the progressive cycle, the concern of the powerful is accentuated facing the likelihood of political-electoral success in the short term for the progressive forces in South America.

In the face of the imperialist onslaught, Venezuela is an example of dignity that articulates the working class, together with other dominated and oppressed sectors, the will to amalgamate and undertake plans for the redemption of the peoples of Our America. The enterprise for the liberation of the continent has its inspiration in Venezuela which is the main front for American emancipation. In short, the continent faces a historical dilemma, the Bolivarian Ideology and the Monroe Doctrine are in confrontation, an issue that indicates the geopolitical importance of the progressive or revolutionary struggles taking place in the Great Homeland.

In this context, the workers gathered in the Bolivarian Republic of Venezuela on the occasion of the “First International Meeting of Workers in Solidarity with the Venezuelan Government and People,” hereby declare:

Likewise, the First International Meeting of Workers in Solidarity with the Venezuelan Government and People agreed to adopt the spirit of the “Workers´ Proclamation and Plan of Struggle of the 25th Meeting of the Sao Paulo Forum” adopted in Caracas in July 2019. Consequently, we approve the following Plan of Struggle:

Approved in the City of Caracas, Cradle of the Liberator Simón Bolívar and Capital of the Bolivarian Republic of Venezuela on August 31, 2019.