To the Leadership & Cadre of the African People’s Socialist Party,

To the Leadership & Supporters of the Uhuru Movement in General,

Unión del Barrio enthusiastically expresses our support and unconditional solidarity with the African People’s Socialist Party (APSP), and we demand an immediate end to all U.S. state repression against the Uhuru Movement!

On Friday, July 29, 2022, between 4:00 and 5:00 am, FBI agents simultaneously broke into various APSP offices and private homes of the APSP leadership and supporters in different parts of the United States. These violent raids were carried out with the deployment of paramilitary forces using long weapons, flash-bang grenades, and drones, as well as involving deceptive tactics, temporary detentions, and interrogations. The U.S. government seized computer equipment, phones, and files from these offices and private homes.

Clearly, these terrorist tactics were used by the FBI against the Party’s leadership and its membership to demonstrate that the agency seeks to block the advancement of self-determination and liberation struggle that has characterized the work of the APSP for over 50 years. The slanderous arguments used by the FBI to justify this attack are nothing more than a fabrication contrived by the same agency responsible for the most violent repression against social movements in the belly of the beast – in particular, the brutal murders of Fred Hampton, Malcolm X, Martin Luther King Jr., to name a few. It is clear that the FBI and J. Biden’s imperialist and repressive government are desperately seeking to impose their power through violence and believe that with falsehoods and political slander, they will intimidate and subdue APSP leadership and its historical militancy.

The Party, its membership, and the people who support them know very well that what is at stake is the danger that millions of minds within the belly of the beast who seek true liberation will come to know the ideological power of the Party’s philosophy and legacy of organized struggle. The colonialist-imperialist state fears that we will identify the urgent need to overturn its legacy of colonialism once and for all, and reclaim what historically belongs to oppressed peoples in general, and African people in particular.

Unión del Barrio has assumed a defensive footing, and we stand in solidarity with the struggle of the African People’s Socialist Party and the International Uhuru Movement. We reject the reactionary slanders and lies perpetuated by the FBI and its puppets. We stand firm by our decades-long relationship of principled solidarity and political unity with the APSP, its leadership, and the Uhuru Movement in general. We reiterate this unconditional solidarity today and always. This criminal act of aggression against the African revolution will not go unchallenged.

Touch One – Touch All 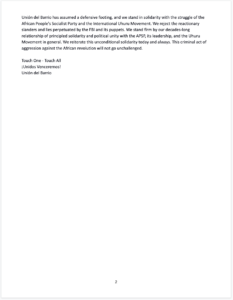