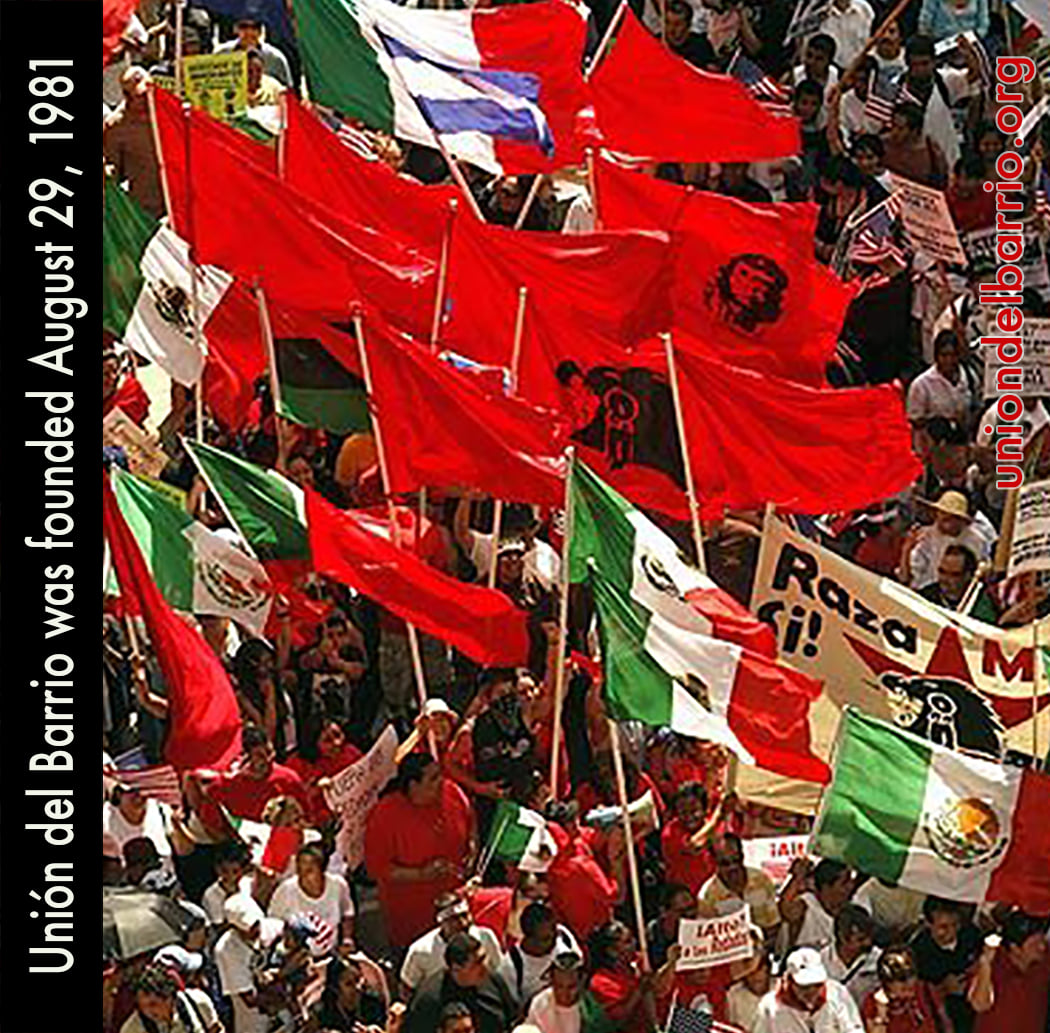 AUGUST 29, 2022- CALIFAZTLAN – Today, Unión del Barrio commemorates 41 years of anti-colonial struggle. We take this moment to reflect on the tremendous accomplishments of our people’s struggle for Raza Self-Determination, Mexicano Liberation, and the international struggle for socialism. In these 41 years of struggle, we have evolved our thinking and strategies to adapt to the constantly changing realities confronting our people and prepare our community to challenge the settler colonial laws that oppress our communities.

Unión del Barrio was founded to build an organization of organizers!

In 1981 when Unión del Barrio was founded, it was during a period when the Chicano Movement had been viciously attacked by the US colonial system, specifically by the FBI and its Counter Intelligence Program (COINTELPRO). A program meant to divide the struggles of oppressed and colonized people and foment divisions and mistrust. The colonial state infiltrated movement organizations, incarcerated leaders, and repressed activists to neutralize a worldwide movement for socialism. We saw the disarticulation of our people’s struggle for Self-Determination during the late 1970s.

The emergence of Unión del Barrio on August 29, 1981, was a response to the hostile nature of US colonialism directed at the Chicano Mexicano working class. The founding was also a response to the sell-out nature of the Democratic and Republican politicians. Riding on our communities’ struggles, the Hispanic neo-colonial sectors joined these political parties with the idea that changing our material conditions was electing one capitalist colonizer over another.

Unión del Barrio refused to accept that false choice and instead aspired to build our own political representation that articulated our aspiration for political liberation and independence from the gringo controlled economic system. Upholding a central premise of the Chicano Movement, Unión del Barrio advanced a struggle for liberation and independence rather than a struggle only for “civil rights.” We uphold the understanding that we are an indigenous people on our own land, stolen by the settler colonial US empire. As such, we do not recognize the colonial borders of our oppressors. We presumed that workers are the producers of all wealth and that our struggle for national and class liberation was bound up with the effort to have control over our labor, natural resources, and the means of production. Finally, our struggle aligned with the fight for a relevant education (what we identify as Chicano Studies) to advance the science towards our liberation and unite Raza in the barrios to end barrio-based horizontal violence, unite workers and direct the chingazos against our common enemy: US imperialism and colonialism!

We were determined to define the content, direction, and political orientation of our movement through a process of Concientización, Organización, Acción y Liberación. This dialectical process will help us understand the material conditions of our oppression and develop the strategy and tactics for our liberation.

After 15 years of political existence and taking on a critical look at the nature of our organization, Unión del Barrio internalized the importance of establishing an organization that functions under the principles of Democratic Centralism during the specific period of history when the capitalists celebrated the disintegration of the Soviet Union and had declared the “end of history.” We studied and engaged with various political parties throughout Nuestra America and within the political borders of US imperialism. Our contact with the African People’s Socialist Party had a particularly significant impact on the political evolution of our organization. Convinced with the need to build the organization in every sector of our community, we moved to create barrio-based power in the classroom and the workplace to enact dual and contending power from the capitalist-colonial state.

Our struggle deepened our unity with our people throughout Nuestra América and united with the integration process that emerged with the Bolivarian Revolution of Venezuela. The creation of the Bolivarian Alliance with the People of Nuestra America, founded by Fidel Castro of Revolutionary Cuba and Hugo Chavez of the Bolivarian Republic of Venezuela in 2004, had a profound influence on what role Unión del Barrio must play in supporting the integration process of the peoples of Nuestra America as we witnessed the emergence of a movement to build socialism throughout the continent.

Unión del Barrio Turned 40 in the middle of the worst pandemic humanity has experienced in a century.

There is no doubt that COVID has had a devastating impact on the people of the world. Economies were hit hard, working-class people carrying the heaviest burden despite the massive transfer of wealth. The pandemic exacerbated these inequalities, and today our organization is challenged with advancing our strategy of “Community Level Self-Defense, Building Dual and Contenting Power, and serving as the Rearguard for the struggles throughout Nuestra America. In this context, we salute every militante who struggles within our ranks for carrying this legacy of work forward.

As Unión del Barrio commemorates 41 years of anti-colonial struggle, we uphold the importance of organizational unity, which is the basis of our strength. The uncompromising position of Unión del Barrio to challenge US imperialism and its lackeys requires unwavering discipline, especially considering the highly volatile nature of our enemies. With US imperialism losing influence through Nuestra America and the world, it has become more violent and hostile towards any liberation-oriented organization. It has carried out genocidal wars, military and soft coups, and media wars against any movement and people struggling to be free from its wretched influence.

Such is the case with our closest ally, the African People’s Socialist Party. Just as they did in the ’70s, the colonial state attempts to silence the righteous struggles of our people who struggle for our freedom and liberation. An attack on one is an attack on all of us, and we are responsible for closing ranks against our common enemy.

This year as we prepare for our VII Congress, we are responsible for overcoming the isolation that the pandemic has imposed on society physically and psychologically. We must continue engaging our people beyond the virtual limitations of algorithms that serve primarily to reinforce individualistic attitudes and preferences. Our ongoing community struggles must continue to grow; whether it be for independent community-based education with Escuela Aztlan, our fight to teach Ethnic Studies within the colonial education system, our work to defend our communities from migra-police terror, our struggle against the colonial prison system both “En las Calles y en la Torcida,” our effort to build Comites de Resistencia wherever our people are, and our struggle against all forms and expressions of patriarchy and misogyny.

We are convinced that revolutionary organization is necessary if we want to achieve liberation.

TOWARDS OUR VII CONGRESS