United Under the Theme: END THE WAR ON THE WORKING CLASS! 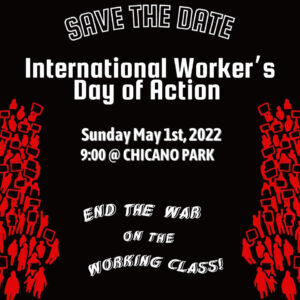 WORKERS WILL CONVENE ACTIONS AND EVENTS TO BUILD WORKERS POWER

TO CHALLENGE THE ATTACKS ON WORKING FAMILIES

SAN DIEGO, CA- Organizations  throughout San Diego unite to push back on the anti-worker climate currently facing both non-union and unionized workers. Organizations from throughout San Diego County will mobilize in a demonstration of class unity and internationalist solidarity with workers throughout the world to demand an end to all expressions of war, exploitation and the growing gap between the financial capitalist billionaire class and the working class.

The $770 billion dollars war budget passed by congress surpasses all social priorities such as healthcare, (medical, and medicaid), housing, education, and protecting the environment. Instead we have seen an escalation in funding for war on working people the world over, increased military aid to support the occupation of Palestine, illegal and unilateral economic, financial and commercial blockades against Cuba and Venezuela.

The continued funding of war at home with increased budgets for police, border patrol, immigration enforcement and detention of migrant workers has aggravated the economic recovery of black and brown communities.

Locally we have seen :

The anti-worker sentiment illustrated by corporations that have become extremely wealthy because of the pandemic have doubled down to increase their profit margins by engaging in union busting. The most notable are Amazon and Starbucks.

In an expression of Unity we San Diego workers will rally behind the following demands:

May 1st endorsing organizations include: