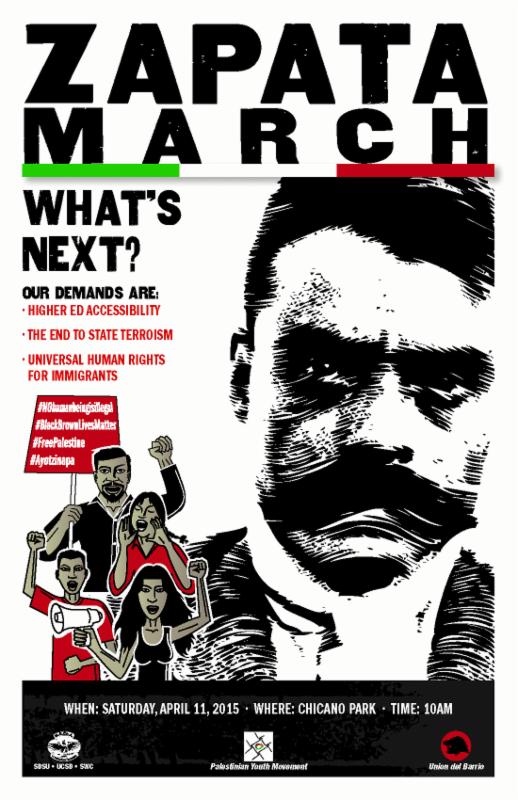 As working class raza youth, organized under the banner of self-determination, organizations in San Diego have united to stand up and denounce the ongoing war against poor people in our city, throughout the United States and around the world. Unión del Barrio, el Movimiento Estudiantil Chicana/o de Aztlán and the Palestinian Youth Movement have built an alliance to bring to the forefront the urgent issues that occupy the minds of conscious youth who are determined to politicize more of our young people and bring them into organized resistance.

On Saturday April 11th, raza will take to the streets to make visible the struggle for human rights, to reject state terrorism, and defend our right to a College/University education. We will take to the streets in one of the most combative communities of San Diego to outreach and send a message of struggle, unity, and resistance to oppression & exploitation.

We respect the spirit of General Emiliano Zapata, great Mexican revolutionary warrior who fought for land and freedom, who taught us that “the land belongs to those that work it,” and fearlessly that he would rather die on his feet, than to live on his knees. This is the source of inspiration for our movement as we continue the struggle that Emiliano Zapata, Comandanta Ramona, Patricia Marín, Ernesto Bustillos, and Reies Lopez Tijerina left to us as part of a legacy of raza resistance to US colonialism and imperialism.

WE FIGHT FOR OUR HUMAN RIGHTS

As youth we fight to resist laws that criminalize and separate our families. We reject laws that make it a crime to work, and which impose fear in our communities. Our families work and we produce massive amounts of wealth from our labor. This wealth is transferred to rich employers who exploit our labor. We fight so that our rights are respected. We recognize that family unity, healthcare, education, housing and decent wages are all part of our human rights.

As a people we are confronted with a period in history marked by unprecedented deportations justified as the so-called “war on terror” or “war on drugs.” After falsely promising immigration reform in his first year as president, the democrat Barack Obama is the president responsible for the largest number of deportations in the history of the Unites States. In December of 2014 Barack Obama announced that it was okay to use racial-profiling to enforce immigration laws even though it had been unconstitutional to racially profile people since the passage of the Civil Rights Act 50 years ago. Here we have the first black president who then declared it OK to racially profile Mexicans and allow the migra to use race to question us about our immigration status.

The recently announced Deferred Action for Childhood Arrivals (DACA) and Deferred Action for Parental Accountability (DAPA) are part of the deportation system that is meant to divide our people and separate the “good immigrant” from the “bad immigrant.” DACA/DAPA are part of an Executive Order (presidential order) that would temporarily provide work authorization to approximately 5 million undocumented people, while excluding at least 6 million others from temporary relief from deportation. DACA and DAPA were put on hold by some of the most anti-Mexican governors in the United States (17 of them) who have sued Obama for providing this temporary relief. While a judge has temporarily halted the implementation of this executive action, we see our task as one of informing our community of their rights, not only to apply, but also the risks involved.

We also recognize that part of our human rights is the need for all people to have access to healthcare. The Affordable Care Act (ACA or “Obamacare”) excludes raza sin papeles from accessing medical benefits and denies our families the ability to access affordable and preventive medical care. Even though our communities are largely working class, often we are not able to file for health care nor receive a tax return – even though we do pay taxes.

Human Rights are also workers rights. Our people are currently struggling to recover the value of our labor. We are fighting to get back the wealth that is stolen by low wage employers. We have been in the fight for $15 dollars an hour and a labor union to help overturn the massive inequality that exists in this society.

WE FIGHT FOR COLLEGE/UNIVERSITY EDUCATION

Another demand of the 2015 Zapata March is accessibility to higher education. We believe that College/University education should be accessible to everyone, not just a wealthy few. We believe that the current educational system creates roadblocks that force raza students to choose other paths rather than a College/University education. These roadblocks should be taken as an attack against us as students.

An example of this is what is happening at throughout the University of California (UC) system. The UC administration has proposed to increase student tuition by 5% every year for 5 years. This fee hike comes after numerous other hikes throughout the years that make a UC education far too expensive. As students who come from working class communities we oppose this increase, because it will have a negative impact on our ability to get a UC education – something that is already almost impossible for the majority of our community youth. Another increase will discourage and prevent students who come from our barrios to attend these institutions.

Additionally we believe that public universities should primarily attend to the needs of the local communities – first and foremost. Today, especially within the UC system, we see a type of “gentrification” were large numbers of rich international students are recruited to UC campuses while local students are increasingly denied access to a UC education. We fight to reinstitute programs such as the “Local Admission Guarantee” within the CalState system, where students from local high schools are prioritized for admission into college campuses. The same goes for the UC system, were we demand that the “Transfer Guarantee” allow students the ability to transfer to a UC school from community colleges.

We believe that an educational institution such as the UC system should not have an individual like Janet Napolitano serving as president. Janet Napolitano will be remembered as one of the key persons responsible for Obama’s 2 million deportations when she served as Secretary of Homeland Security. She is responsible for the separation of millions of families, and she is a supporter of a border that has claimed thousands of lives. We oppose this type of leadership for our Colleges and Universities, and believe it is because of people like Napolitano that the UC system is moving closer to a privatized system seeking more profit for the wealthy. We believe that the massive investment into war and war-making must be redirected and instead public tax money be used for the educational needs of future generations.

As conscious youth we have seen the impact of police-migra violence in our barrios and in our region. As a border town we know the impact of the current administration’s massive immigration enforcement policy that continues not only to deport our communities in record numbers, but also has normalized violence against raza. We have seen many families torn apart by a wave of border deaths at the hands of Border Patrol, families separated by ICE, families racially profiled by the police, and families incarcerated by the in-justice system.

The number of Border Patrol related killings continues to grow throughout the United States. The Border Patrol has claimed the lives of 40 people since 2010 without a single agent prosecuted for their crimes. These agents have enjoyed complete impunity in highly publicized cases such as the cases of Anastasio Hernandez Rojas (2010), Sergio Adrian Hernandez-Guereca (2010), Carlos Lamadrid (2011), Valeria Munique Tachiquin (2012), José Antonio Elena Rodriguez (2012), and Francisco Ceseña (2014). Each of these cases had individuals that were brutally killed, and some even tortured.

Additionally we have seen the modern day lynching of the African and Mexican community by local police, recently highlighted by the cases of Michael Brown in Ferguson, Eric Garner in New York, Jessica Hernandez in Denver, and Antonio Zambrano in Pasco. These are all current examples of the long tradition of police containment and brutality against black and brown people living in the United States.

This ongoing use of state violence and terror is a reflection of the United States long held policy of violence against the poor and working class communities of this country. It is a policy used against other countries and peoples as well. The recent cases of the 43 students disappeared by the Mexican government in Ayotzinapa Guerrero are part of the US ongoing “war on drugs” under the Mérida Initiative. It is a policy of supplying the Mexican government with weapons, heavy artillery, and military training to support Mexico’s on-going war on the poor. Since the announcement of the US-Mexico War on Drugs there have been more than 200,000 Mexicans killed by the federal, state and local police in Mexico. We unite with the families of Ayotzinapa and demand an end to Plan Mérida; an end the US involvement in the killing of Mexicans in Mexico and in Aztlán.

As conscious youth we denounce all forms of state violence against innocent people. As youth who are conscious of events that happen in other parts of the world, we denounce the systematic killings of the Palestinians by Israel – who is provided weapons of mass destruction by the United States at the expense of public tax dollars. We denounce the violence unleashed by the settler state of Israel against the Palestinian people in the Gaza Strip beginning in July of 2014. Today we stand in solidarity with our Palestinian brothers and sisters to demand an end to Israeli apartheid, occupation, and the right for Palestinians to have their own state.

Finally, we reject the illegal and criminal drone strikes used by the Obama administration throughout the middle east; we denounce the use of torture as recently revealed by the US Congress, and we reject the Obama Administration’s attack against the people of Venezuela by claiming that Venezuela represents a national security risk to the United States. We call for an end to US intervention in Mexico, Latin America and throughout the world. 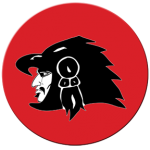