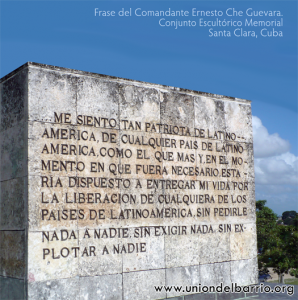 We see ourselves as descendants of indigenous people and heirs to an indigenous struggle against colonial domination. We hope to unite all oppressed people in Aztlan/México Ocupado, regardless of national origin and citizenship, to join the process of building a revolutionary, reunified, and socialist México; ultimately advancing Simón Bolívar’s dream of a unified continent.

Within the borders of the United States, we have historically suffered under colonial oppression, isolation, and dehumanizing conditions. As a consequence, the need to struggle against these harsh realities led to the emergence of different terms used to identify ourselves. Mexican American, Latin American, Latina/o, Hispana/o, Raza, and Chicana/o, are examples of some of these identifiers. Terms such as La Raza and Chicana/Chicano have progressive connotations that were widely used during the Chicano Power movement. Even today, these terms are used in a positive and political fashion. We recognize the historical and political significance of La Raza and Chicana/Chicano, and will ourselves use them when appropriate or necessary. Nevertheless, as a revolutionary organization struggling within the current borders of the United States, we believe that specific national identifiers such as “Mexicana/o”, “Salvadoreña/o”, “Chilena/o”, and collectively La Raza, best cover the historical, geographic, and cultural range of our movement. We see our diverse national identities as the foundation of a unified continental identity covering all of Nuestra América.

We hold that the struggle of La Raza in Aztlan/México Ocupado is historically and geographically defined as an indigenous and Mexicano anti-colonial fight for land and socialism. However, we also recognize the colonial experiences of many of our gente in Aztlan/México Ocupado has impacted, over time, the social, political, and economic characteristics of La Raza. As an organization, we were born from of the Chicano Movement, but with a clear understanding that our fight did not begin in the 1960’s. Since 1492 when Columbus set foot on these lands, indigenous people have resisted foreign occupation and struggled for self-determination. We see this resistance as the beginning of our movement, and today we continue to struggle for the liberation of Nuestra América. We are Raza Internationalists, and we welcome all people who accept this political program into Unión del Barrio, including those that are not of Mexican descent. Following the example of Ernesto “Che” Guevara, we see it as the revolutionary duty of all freedom loving people to fight on the side of La Raza within the current borders of the United States..

GO TO WHO WE ARE, POINT II: “This is “Nuestra América” – We Are Indigenous Nations.“