Mexico is experiencing one of its worst crises in its history; politically, economically, socially, and culturally.

The Mexican state, led by political parties at the service of international finance capital, are selling and distributing the wealth of the nation to foreign banks and foreign interests. This has resulted in the looting of Mexico’s national wealth, and the displacement of entire populations – a majority of them, indigenous communities. The Mexican government uses state violence against working people; criminalizing social protest, and physically eliminating all who oppose the neo-liberal capitalist model. 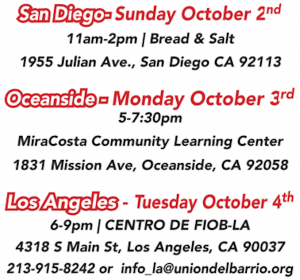 The United States, in alliance with the PRI-PAN-PRD political class, provides weapons, training, heavy artillery and military intelligence under the initiative known as the “Merida Initiative”, a U.S. military plan to attack the Mexican people, and steal Mexico’s wealth by using foreign companies and so-called foreign “investments”. As an extension of the Merida Initiative, the US also implemented a “Southern Border Strategy” where governments of the U.S. and Mexico are militarizing the Mexican border with Guatemala and Belize, in order to intercept and deport Central American migrant workers, as they make their way north.

These measures, designed and implemented from the centers of the United States of America, have resulted in hundreds of thousands of deaths, disappearances, imprisonments, displacements and deportations.

We invite you to attend and discuss these issues, with those who face the consequences of U.S. militarization, and hear first hand accounts of the impact in Mexico. Join us in welcoming the Regional Center for Human Rights Morelos y Pavón (Guerrero), Center Frey Matías (Chiapas), and a survivor of the September 26, 2014 attack in Iguala Guerrero, a student from the Normal Rural School Isidro Burgos, Ayotzinapa Guerrero.