May 25, 2018 Unión del Barrio condemns the extrajudicial killing of Claudia Patricia Gómez González, a 20- year-old Mayan woman from Guatemala at the hands of a Border Patrol agent in Rio Bravo, Texas. Unión del Barrio recognizes this extrajudicial murder as constituting a policy of terror and violence by the colonial laws of the […]

Unión del Barrio is a barrio based revolutionary organization, born from the Chicano Power movement of the 1960’s & 70’s. We were founded on the guiding principles of Raza Self-Determination and National Liberation. Our ultimate struggle is to recover the lands stolen from the Mexicano-indigenous people in 1846 by the illegal US settler invasion, war […]

There is a group of young organizers in LA that work with Escuelita Aztlan, a youth project of Unión Del Barrio. Escuelita Aztlan (EAZ) is Unión del Barrio’s independent freedom school that fuses cultural learning, political activism, and community organizing. EAZ recruits straight from the barrios of Los Angeles to bring together the most spirited […] 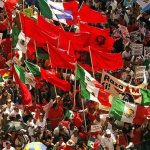 Unión del Barrio (UdB) was formed in 1981 by a half-dozen activists as a San Diego barrio-based organization, and has over time transformed itself into a Raza Internationalist formation with Bases of community work in San Diego, Los Angeles, and Davis California, as well as members in other locations. Over time UdB participated in many actions, conferences, […]