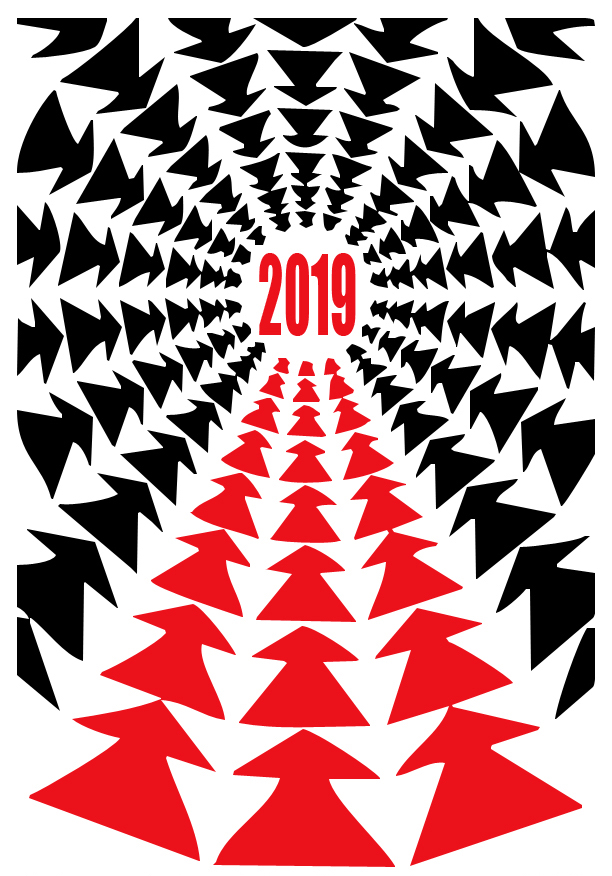 To the general membership of Unión del Barrio, to our supporters and friends:

The Comité Central of Unión del Barrio wishes each of our members, supporters and friends an excellent 2019. Whether your goals are political, family related, or personal, we hope that they all materialize for you during this coming year, 2019.

2018 ends as a year defined by our ongoing resistance to the Trump regime. Each of the barbarous attacks emanating from the White House was challenged by our combative membership with ideological clarity. We did not take one step back, not even to gain momentum as we advanced the defense of our communities. Through our organized actions, we made real the call for the self-defense of the Mexican/Latin American people within the US.

We salute the fighting spirit of our membership for your work in defense of our communities during 2018. We recognize the efforts of every comrade who worked hard to achieve important political victories: the struggle for a more relevant education for our youth in the State of California through the advances made within the Ethnic Studies Nowcampaign; the struggle to decriminalize street vendors in Los Angeles; the re-election of José Lara to the school board in Pico Rivera, California; the reactivation of the Community Patrolsto defend communities from ICE raids in San Diego; the 2018 Raza Youth Liberation Conference; the ongoing success of the Unión del Barrio Saturday school, Escuelita Aztlan; the Chicano Mexicano Prison Project(CMPP) and its ongoing work to defend the rights of raza prisoners and the annual CMPP conference; the defense of Chicano Parkin San Diego from neo-nazi/KKK threats, and the innumerable meetings and actions that were organized throughout year that most people never hear about. We must also consider that in 2018 we faced the physical loss of our comrade Pablo Aceves; a person who played a central role in the tasks and political life of our organization. We recognize the loss felt by every member of Unión del Barrio and we commit ourselves to honor the memory of our beloved comrade Pablo.

The year that we are leaving behind was difficult for all the peoples of the world who struggle to obtain their independence from imperialism. There was a fierce and murderous war waged by the orange buffoon that inhabits the White House that zeroed in on migrants in particular, and who live under the constant threat of fascist terror. Trump and his reactionary henchmen do not even allow peace and tranquility for migrant children, instead separating thousands of them from their parents to put them in private centers where they live and die in precarious, overcrowded conditions that remind many observers of Nazi-style concentration camps. Despite the fact that the entire world protested these events, Trump and his insane followers continue their relentless war against migrants. As problems escalate for the Trump regime, he intensifies his attacks against our communities.

Of course, Trump and his henchmen did not just attack our communities. They also played a leading role disrupting countries across Nuestra América – Cuba, Nicaragua, and Venezuela in particular, which National Security Advisor John Bolton, in true imperialist form, has classified as “the Troika of Tyranny.” These three countries have been targeted with direct and indirect interventions. These attacks support a policy of fomenting economic and social destabilization and thus create the possibility of overthrowing what are democratically elected governments in these countries. The ongoing bombardment of lies and misrepresentations by the transnational corporate media has become our daily bread. Unión del Barrio has defended these allied countries, denouncing and clarifying the distorted news that is disseminated every day on television or via the Internet.

What is most ironic is that the United States government accuses the governments Cuba, Nicaragua, and Venezuela of not respecting the human rights and civil liberties of their citizens. This while the United States maintains the largest prison population per capita in the world; the US holds in solitary confinement more than 80,000 inmates; it is responsible, on a national level, of an average of three deaths (murders) per day at the hands of the police; it produces more waste and pollution than any other country in the world; imposes student debt that keeps the graduates of their universities in a state of servitude to private banks and financial companies; has millions of its citizens in each of their cities living under bridges, on the streets and/or in cars; blocks millions of people from having access to healthcare; and has military troops in more than 150 countries, with hundreds of warships and warplanes scattered across the globe. Finally, the United States has a president who has been accused of sexual abuse and assault by at least 15 women; he is a president who lies to his country several times a day. This president is ultimately responsible for the deaths of two Guatemalan migrant children: Jakelin Caal Maquin of 7 years and Felipe Gómez Alonzo of 8 years, whose deaths occurred while they were in the custody of US immigration authorities. The US traffics in terrorism, selling the latest most terrible weapons to the highest bidder, not only with its national territory but worldwide, as in the case of Saudi Arabia and its genocidal war against the Yemeni people, or Israel and its ongoing war against the Palestinian people. This is the US that dares accuse other governments of failing to support democratic and humanitarian rights!

Within all this barbarism, 2018 brought us a break – what might be a breath of fresh air. During the month of July, Mexico and its people surprised the world when the Juntos HaremosHistoriaCoalition and its presidential candidate Andrés Manuel López Obrador (AMLO) triumphed in the presidential elections. Unión del Barrio expects advancements in Mexico within the struggles against violence, corruption and poverty. We look forward to a day when Mexico defeats the corruption and violence that is rooted in parasitic imperialism and has blocked our people from freedom, peace and social harmony. Only when this happens will the people of Mexico finally define our own future. We are encouraged by the position of AMLO and the IV Transformaciónwhen the structural changes of the Peña Nieto government are repealed, and the cancellation of Plan Mérida is confirmed. Furthermore, respecting the sovereignty of the Bolivarian Revolutionin Venezuela and rejecting the Lima groupare also good signs. Unión del Barrio recognizes that there is still much to achieve for there to be a true participatory democracy in Mexico, and we are compelled to focus our attention on struggles that will come to the south of the imperialist border that divides our people, and if need be we will be ready to defend our people in Mexico and the IV Transformación.

We salute those countries that make up the Alianza Bolivariana de los Pueblos de Nuestra América-Tratado de Comercio de los Pueblos(ALBA-TCP),for their example and commitment to continental integration for socialism. The recent ALBA summit held in Havana demonstrates the commitment to continue developing an economic plan that achieves the true Human Rights and begins with a policy of non-intervention for the peoples of Nuestra América. It must also ensure health, education, housing, culture, and sports. In this way the ALBA-TCP shows us that another world is possible.

Once again we reiterate our best wishes that 2019 bring us all many new achievements and advances.