Unión del Barrio engages in ongoing struggles to resist migra-related violence and repression. When we deal with issues that relate to “Border Violence & Migration,” the most urgent in our communities are those that relate to immigration raids and deportations. Our daily community work must prioritize the defense of our communities from this expanding and generalized repression of “raza sin papeles.” Meanwhile, we must also raise consciousness, within our communities and beyond, to make it clear that our work on this issue is not based on a white nationalist presumption of “illegality.” 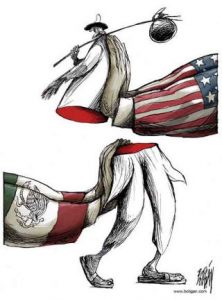 Instead, Unión del Barrio community work should be based on the idea that la raza is not “illegal,” but instead suffer as subjects of colonial and imperialist domination that is imposed on us by an illegal settler nation. Furthermore, when debating this issue, we must include raza from Central and South America, and hold strong to the idea that we reject any and all governments, laws, national borders, and definitions of citizenship that deny our people the full enjoyment of our human and democratic rights. When we include raza from Central and South America, we total more than 50 million people living within the current political borders of the United States. In order to free our people from a subjugated life under the permanent threat of raids and deportation, the work of Unión del Barrio within this sector should develop and mobilize higher forms of organization within our communities, because only strong community based organizational capacity will ensure the sustainable self-defense and long-term well-being of our people.

We must also identify the puppet sell-out Mexican government as complicit in our oppression. The Mexican government represents the interests of a corrupt and murderous narco-state that is in league with the ruling class of the United States. It is a direct beneficiary of mass expulsion of working class Mexicanas and Mexicanos, particularly through the flow of remittances which in 2016 reached $27 billion dollars, which the Mexican government benefitted from without having to do anything to make life better for our people in Mexico.

Finally, we must strive to overturn the current bourgeois definition of democracy as being limited to electoral procedure (voting). Our democratic rights will only be guaranteed through the organized power of the people, because through our organizational power we transcend narrow concepts of citizenship that are built upon, and designed to reinforce colonial and imperialist borders.

NEWS & EVENTS — GET INVOLVED IN THIS AREA OF WORK — POLITICAL EDUCATION